Well, most people may have watched the movie called “The Social Network’ and know a few more things about mark Zuckerberg’s personal life and his college mates other than the techie stuffs and story about facebook. So, here’s something which will definitely make you feel happy, for a while. Mark created a music player in the early 2000’s which automatically detects the taste of music, much like the last.fm does and it was quite like a small step towards his way to become a multi millionaire geek in the industry. In fact, big companies like Microsoft and AOL wanted to buy this app. But Mark joined neither Microsoft nor AOL and uploaded the app for free, then he joined Harvard University and finally, there he started facebook, then called as thefacebook.com. The Application was very popular and was featured on the SlashDot. It was given a rating of 3/5 by PC Mag. Below are some of the reviews from users on cnet.com.

“This is by far the most innovative media player I have see to date the only function I find it lacking is a more advanced tag editor and the ability to group by Album.”

“I’ve been using Synapse media player at home and work for the past month or so, since seeing it mentioned on slashdot.org. It’s a bit buggy, for example audio often glitches at the beginning of a song, and I get an error when I go to view the Log from the web interface. The English query interface can do unexpected thing from time to time as well, however, all complaints aside, the Brain feature of Synapse is quite amazing. It takes it a while to learn, and it’s noticable that it’s constantly in a state of learning/re-learning, but after using is a while it becomes quite impressive. At first it starts playing Mozart right after Led Zeppelin, but keep training it and you’ll like it!”

And here are some screenshots of this cool music application. 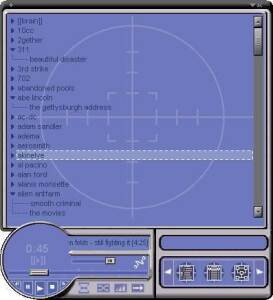 So, in case you have an old PC at home still running some old OS like Windows 98 or Windows XP, you may try out this once, just in case you want to relive the history. You can download the app from here via cnet.com