HTC One (M8 Eye) alleged press image has been leaked and is seen as an advertisement picture which is leaked by famous chinese social network Weibo, it is rumored that HTC is planning to launch M8 Eye into the market this month (October)

This press image of HTC M8 Eye is similar to it’s earlier flagship smartphone as HTC M8, but the difference in both the smartphones is dual camera with 13 MP which we leaked in our previous post 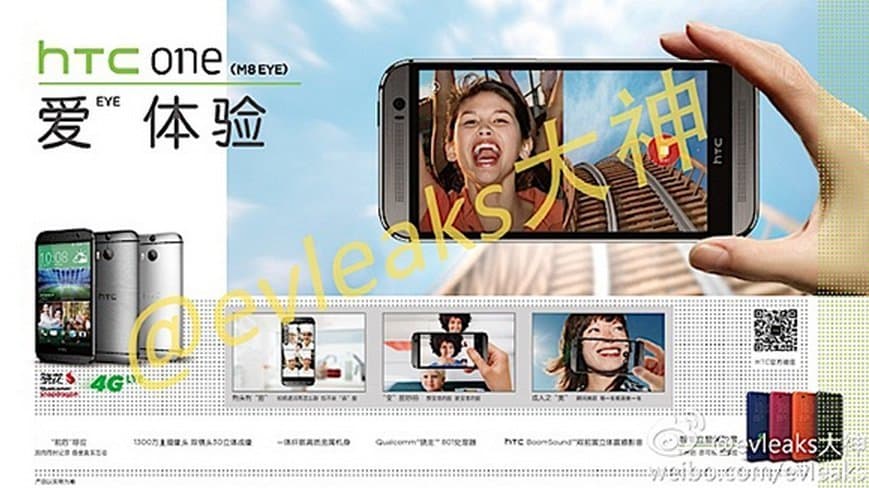 This M8 Eye smartphone is an exact copy with same specifications as like the HTC M8, but one thing we can observe in the M8 Eye is the camera and we can see the same in the advertisement image above someone trying to take a selfie with this M8 Eye. HTC has been experimenting on this device after the negative reviews of Ultra Pixel camera (4 MP) in HTC M8, so this time it improved the resolution ( reasons for this are clearly explained in our previous leak)

We suppose the camera module of HTC M8 Eye might recieve a big update comparing to earlier flagship smartphone, remaining specifications are not yet leaked, but the rumor is that there is no big change we can see in this M8 eye (comparing to M8), so we can expect a snapDragon 801 chip, a 5′ 1080p display, 2600mAh battery, and we suppose it will run on Android v4.4

Still there in no official information regarding the M8 Eye, but we suppose this new smartphone will make an appearance in HTC’s next event which is supposed to happen in New York next week ( Oct 8th)