Infinix Smart 3 Plus Review – Should You Buy it?

Although I got a chance to explore the device even before the release, I couldn’t get time to actually share my hands-on & first impressions as I was out of the station. But the past week I thoroughly tested the Smart 3 Plus and actually used it as my secondary phone. Before we head on to the review, let’s take a look at the key specifications first!

I know the specifications aren’t amusing but have you seen the pricing? The Infinix Smart 3 Plus is priced at Rs. 6,999 for 2GB variant, and it might be the first smartphone under 7K price segment to offer a triple camera on the rear side. But would that really make it worth purchasing? Let’s find out in the review. 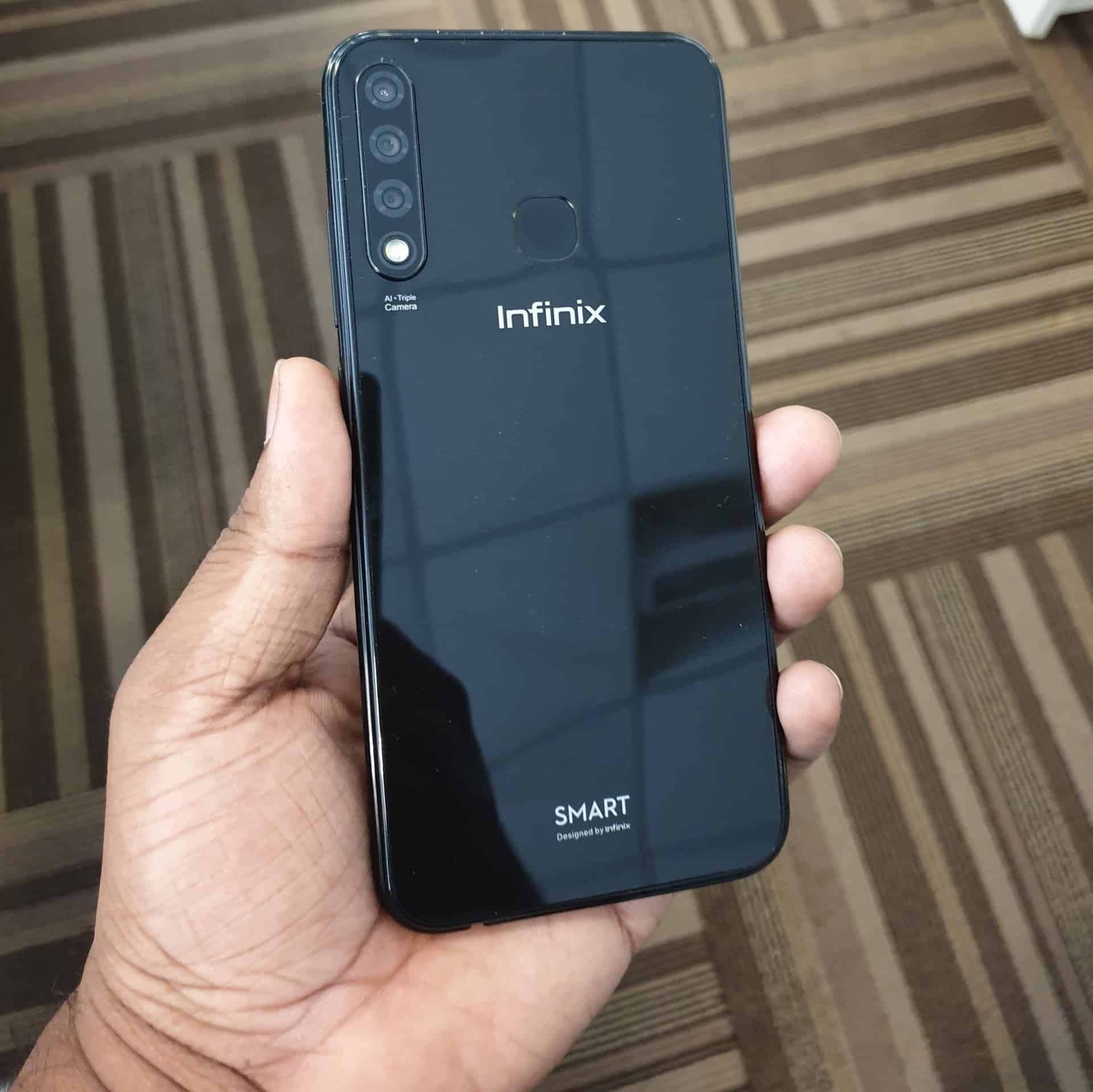 Infinix Smart 3 Plus is designed in such a way that it checks all the points of what makes a 2019 smartphone! It has a water drop notch on the front which houses an 8MP camera. There’s also an earpiece just right above it. The bottom bezels and the side bezels are still thick, and as it’s an LCD display, there’s no curvature on to the sides.

On the rear side, you’ll find a triple camera along with a dual tone flash. The fingerprint reader is right next to it. On to the bottom, you’ll find the headphone jack [brownie points for that] and a traditional micro USB port, a speaker grill, and a mic. The power key & the volume rocker are on the same side and the SIM slot on the opposite side. Overall, the Infinix Smart 3 Plus has got everything that you look in a sub-7K price range.

When I got my hands-on the Smart 3 Plus, I totally felt the plastic [I mean Poly Carbonate body], and it doesn’t giveaway any premium feel. Although the rear side of the phone is quite glossy, it’s a fingerprint magnet. The display has no Gorilla Glass protection which makes it quite vulnerable to drops. It does come with screen protection in the box, but that doesn’t really make up in strengthening the screen. There’s a plastic case that comes along with the phone, and it’s quite trendy. I kind of started using right from the day when I unboxed it as it’s a plastic-made phone. One another reason for wearing the case is the phone is quite slippery. If I have to give a rating for the build quality, I’d give a 2 out of 5. 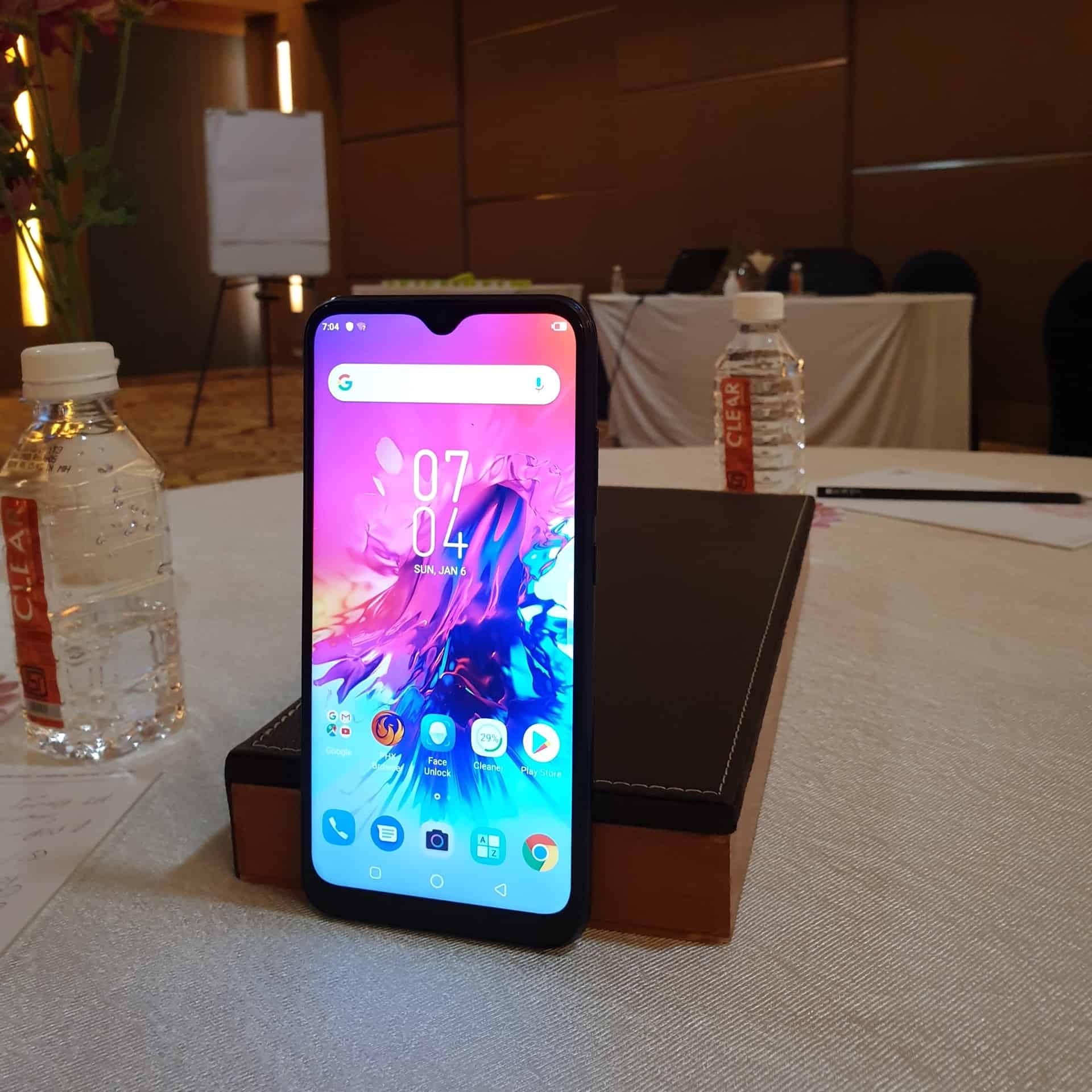 The display of Infinix Smart 3 Plus is quite vivid. Even though it’s a 720p display, the colors are quite bright, but the quality is still moderate as you know the pixels per inch are quite low. You could totally see the quality difference when playing an HD video. In other words, the sharpness is quite low, and it turns you off watching the videos [at least me]. However, you won’t notice much difference in using it longer as eventually, you’ll get used to it. I also want to add a point about gaming, and I had the same level of experience as in watching videos.

Infinix has claimed that it’s the first OEM to offer an AI triple camera on the rear side, and it’s indeed true but there’s a catch in it. All other smartphones in the price segment [in and around, and above] are offering dual camera where the main sensor is complemented with a depth sensor. Even in the Infinix Smart 3 Plus, it has 13MP main sensor complemented by a 2MP depth sensor. In addition to that, there’s a low light sensor which the company claims to offer a brilliant low light photography! How true is that? 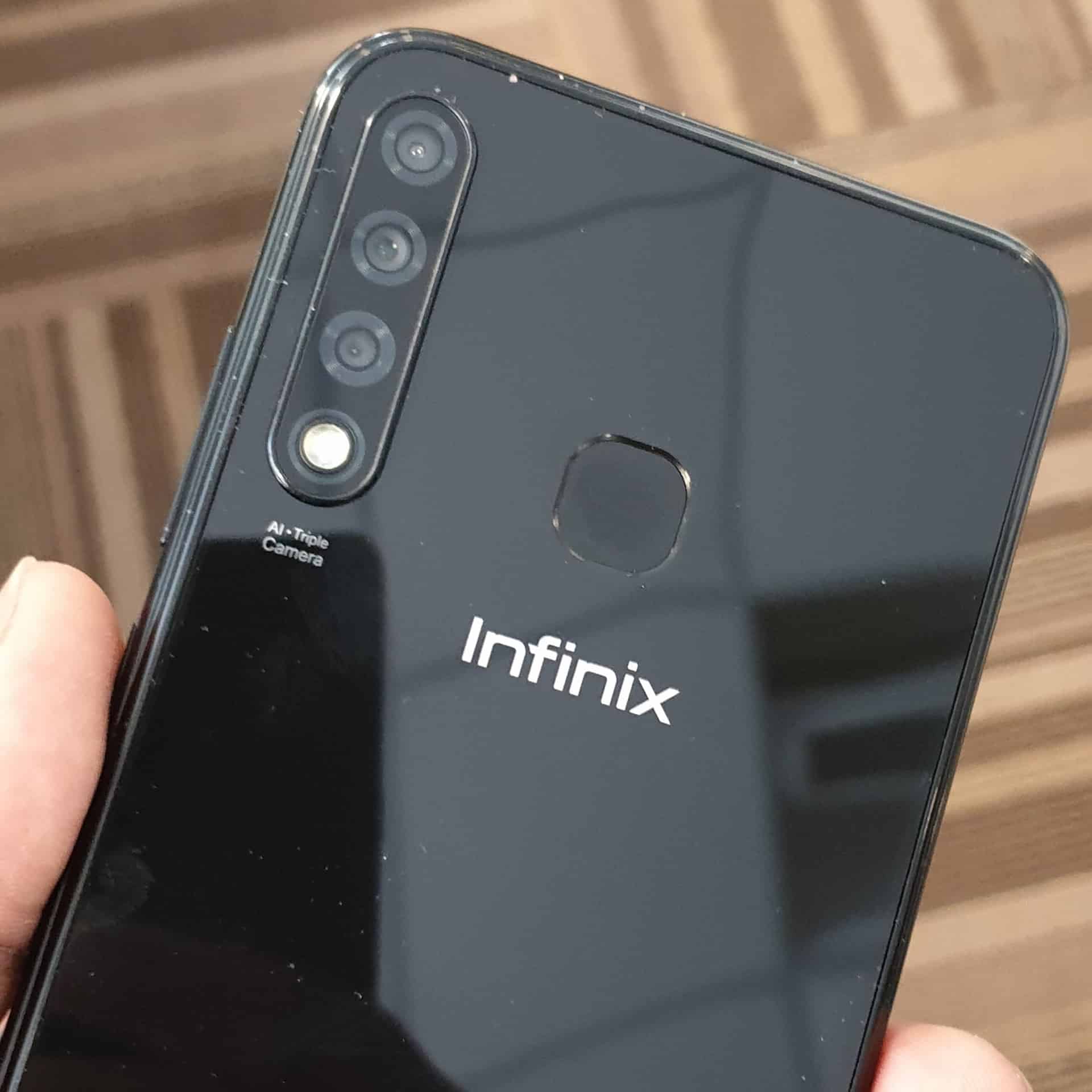 Let me debunk the myth of triple camera first. As you know the depth sensor is just meant to detect the edges and background, but the blurriness/bokéh effect is purely done from the software end at least in the case of flagships. That’s why in the flagships, OEMs incorporate either a telephoto lens or an ultra-wide lens or in some cases, both. When it comes to budget-end and low-end smartphones, OEMs market the phones as if their phones leverage the dual/triple cameras to the maximum potential. Hope you got the connection. If not, check out the maximum camera ISP of Helio A22 here.

In the case of Infinix Smart 3 Plus, only the main sensor is what I believe to actually work, and the rest of the sensors aren’t useful. Moreover, they’re a marketing gimmick! The main sensor does take moderate quality shots, but even when you cover the so-called depth sensor, you’ll notice the bokêh effect. The low light sensor is totally useless. It doesn’t really add up anything and covering the lens also takes the same quality shots in low light.

In normal mode..umm, the AI mode because there’s no normal mode here, and you just stuck to AI mode. There’s no way you can disable it. So, even on the AI mode, the autofocus is quite slow, and it just goes off even when you’re not moving. When you point on to an object, the saturation goes way up, and you’ll see a lot of white light. Reducing the saturation-levels take a lot of time as the slider for that works very slow. But once you manually did everything, it does take a good shot of it. 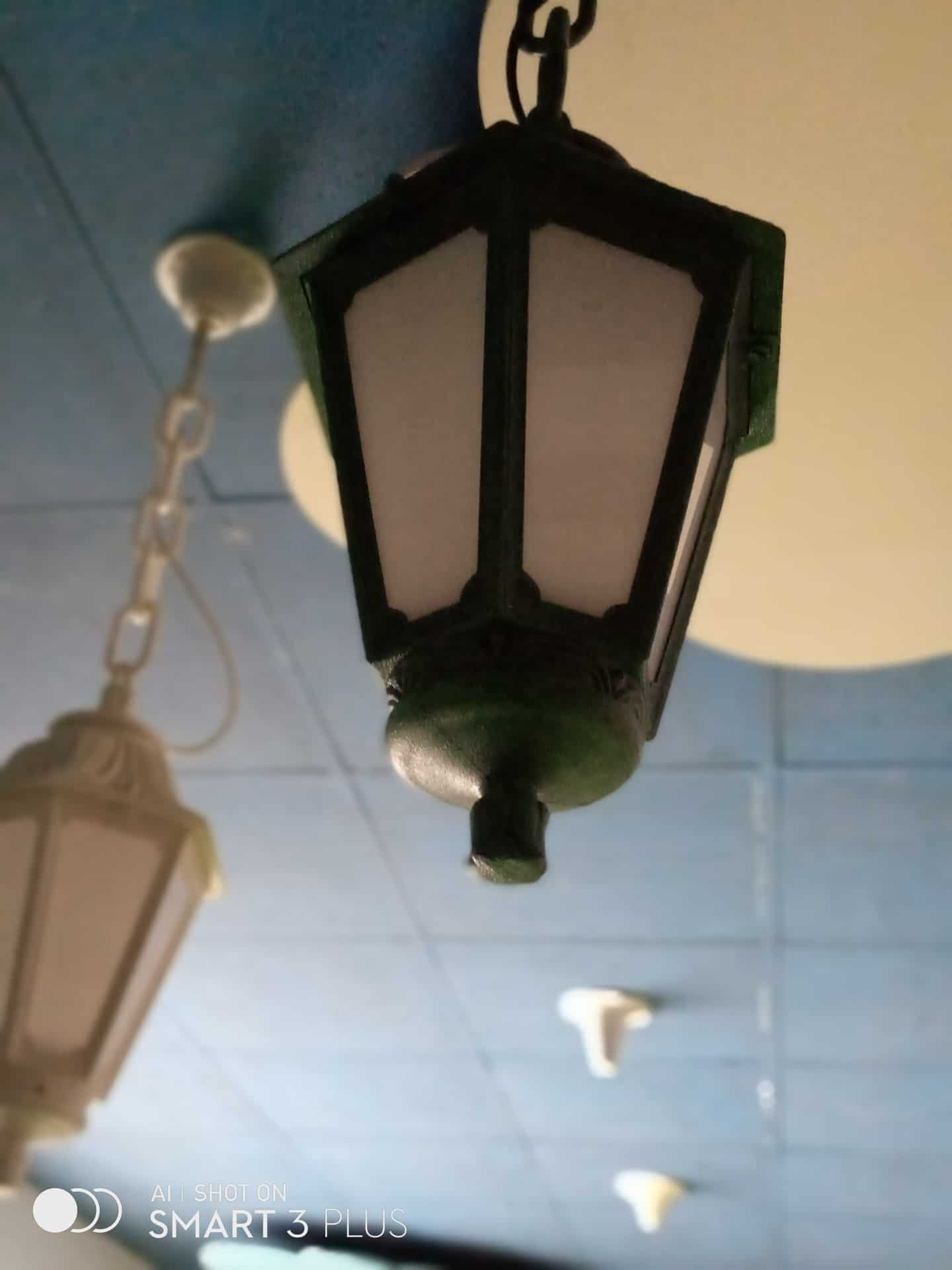 Coming to the bokéh mode, the edge detection isn’t up to the mark. You’ll observe an unwanted blurriness on the focussed object. Even though it gives you control to adjust f-stop, but it doesn’t really help in capturing stunning shots. IMO, it should also give us control in changing the background blur even after capturing the shot.

Isn’t the low light sensor supposed to add more light when taking the shots? But it doesn’t. The low light shots are totally grainy, and filled with a lot of noise. As mentioned, the low light sensor doesn’t really add up to anything, and all I see was a lot of white light which I had to adjust it manually. So, should we really call it an AI triple camera phone? NOT!

The selfies shot on Infinix Smart 3 Plus are quite okay-ish except the part where it gets overexposed and had to manually adjust the saturation levels. Even the details on the portrait mode are not up to the mark. Just like the bokéh effect from the rear camera, the front-one also doesn’t detect the edges perfectly. The beauty mode is something that I didn’t want to check but anyway tried out. As like in several other smartphones, it just smoothens the skin, and nothing more. Anyway, you can check out the album made on Google Photos that shows everything I shot on Infinix Smart 3 Plus.

Just going with the specifications, the smartphone should provide a moderate performance at least on the day-to-day activities. Well, it’s quite not true in the case of Infinix Smart 3 Plus. The device goes sluggish-mode when I open a lot of apps, but again, it’s mainly because of lack of memory. The app load time is quite higher than I’ve observed in other phones with a similar or less configuration. The phone comes with a lot of bloatware, and you cannot uninstall it.

The special features that Infinix claims to improve the experience and performance are just there to bug you. I didn’t like the XOS launcher too as it doesn’t give more control towards customization. Some of the features are ripped-off straight out of other flagship phones like the Bixby Home where it showcases information from different apps in the form of cards. But that’s purely led to make you use those apps. You do have control of disabling it, and that’s a relief.

In all the features, battery lab is something that I like. This is more like power mode or the feature that lets you control the background access, battery saver, etc. I don’t know which part the AI involved, but the feature comes pretty handily.

Nope! I’ve not played extensive gaming as of less memory. The one I tried is the Asphalt 9: Legends and my gaming experience is quite horrible. There’s a big time lag and phone goes super sluggish mode during the gameplay. There’s a high delay and you’ll end up losing the matches. I know I shouldn’t be bragging about it as the specs are quite moderate. There isn’t much to speak about as I’m sure the phone will offer good gaming experience when playing low-end games.

Infinix Smart 3 Plus has both fingerprint scanner as well as face unlock. Both do the job pretty well, and they are quite good. They’re not the fastest nor the slowest but they’re accurate, and that’s what matters. The face unlock doesn’t use an IR sensor, so it’s a typical face unlock that cannot detect when wearing something on your head/face. On low light, the phone’s display goes up to extremes to detect your face, and I disabled it for obvious reasons.

Even with a 3600mAh battery, the Smart 3 Plus lasts longer. On standby, there’s a little discharge, and that’s quite an advantage. With moderate usage, the phone lives more than a day and still offers at least 5-10% of charge the other day. Here’s the hard part. It doesn’t support fast charging and still using a micro USB port. The phone comes with a 5V/1.2A adapter, and it takes more than 2 hours for a complete charge. Besides that, I’ve no complaint about battery life.

Pros & Cons of Infinix Smart 3 Plus

What can I say? Should you buy Infinix Smart 3 Plus? Umm.. definitely, if you are not going to use the phone extensively. The phone does offer a lot of features and has a better battery life, but there’s still something missing in it. The triple camera which the company claims to be a USP is actually not. If you’re planning to gift a phone to your dad or mom who’d be watching a lot of videos on YouTube, and only use the phone for regular tasks like calling, IM, etc. then this could be a choice. Alternatives of Smart 3 Plus are Realme C2, Redmi 7, Max M1, Redmi 6, etc.