Motorola is finally going to launch the Moto Z and Moto Z Play in India today and all we can guess is that many Motorola fans, including me, will be eager to take a look and especially will be a bit curious about pricing and availability.

The launch event will be broadcasted live and it will start at 12PM. So, all you have to do is to keep an eye here and wait for the event to start.

Alternatively, you can head over here to Motorola India’s official YouTube channel to watch the live stream. The Moto Z was launched at the Lenovo Tech World 2016 and the Moto Z Play was launched at IFA 2016 last month, but India is getting them a bit late. However, there are tons of Motorola fans who will be waiting to grab these as the Moto Z is something amazing- the main factor is the semi-modular capabilities which make the phone stand out in the crowd. There are various mods like SoundBoost with JBL speaker, InstaShare mod to turn the phone into a projector.

Now, let’s talk a bit about specs. Moto Z features a 5.5-inch QuadHD (2560×1440 pixels) AMOLED display. The phone is powered by a Qualcomm Snapdragon 820 quad-core processor clocked at 2.2GHz, coupled with 4GB of RAM. There two variants based on storage- 32GB and 64GB. However, there is a microSD card slot. The Moto Z sports a 13-megapixel rear camera with f/1.8 aperture, Optical Image Stabilization with dual-LED flash and a 5-megpaixel front camera. The device is juiced by a 2,600mAh battery. Though it doesn’t seem to be sufficient, no need to worry as it supports Turbo Charging. There is a fingerprint scanner on board and connectivity options include 4G LTE , Wi-Fi 802.11ac, Bluetooth 4.1, NFC, USB Type-C. The phone runs Android 6.0 marshmallow out of the box and Motorola has announced the Android 7.0 Nougat update by the Q4 of 2016. One notable thing is that Moto Z doesn’t have a conventional 3.5mm headphone jack, and just like every other brand is trying to remove it Motorola also followed and the microUSB will be used for listening to music.

Now, the Moto Z Play is somewhere a little lower end device.  The phone comes with a 5.5-inch full HD Super AMOLED display. It is powered by a Snapdragon 625 processor, coupled with 3GB of RAM. The storage option is only limited to 32GB, but you can expand it using a microSD card. The Moto Z Play also features a 16-megapixel rear camera with f/2.0 aperture, Laser Autofocus, Phase Detection Autofocus and 4K video recording and also a 5-megapixel selfie camera. It also has a fingerprint scanner. Connectivity options include dual-SIM card slots, Bluetooth 4.0 LTE, Wi-Fi and USB Type-C port. This phone comes with 3150mAh battery and yes, the 3.5mm headphone jack is there on the Moto Z Play. 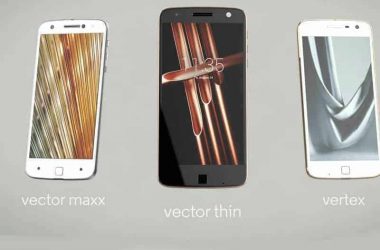 The much awaited Moto Z Play, codenamed Vertex has been spotted on Indian shipment tracking site Zauba. According…