It’s not even a month since I reviewed Nubia M2 Lite, and here I’m with another phone from Nubia. This time it satisfies one of the biggest trends in 2017 which is #TheBokehEffect. Yeah, you read it right. It has the dual camera on the rear side and doesn’t put a hole in your pocket. I’m talking about Nubia M2, the flagship from Nubia which comes equipped with all the specifications you expect from a camera-centric phone. Let’s check Nubia M2 Review to see if it ends up like Nubia M2 lite, or does a better job like several other dual camera phones?

As Nubia M2’s USP is the dual camera, so I spent a major amount of time on testing its capabilities. The rest I spent on testing the battery life and assessing the performance. Before we move any further, let’s take a look at the specifications.

Now that you know the phone’s specifications and it runs on Snapdragon processor instead of MediaTek, let’s get into the review, shall we..!

I don’t want to compare the Nubia M2 with an iPhone 7 Plus, but let’s say the design is heavily inspired. When compared to its old brother – M2 Lite, you can find a slight difference in the design. One of them is the headphone jack placement. It is swapped with the speaker grill position. Also, the power button and the volume rocker are in black with gold layer while in Nubia M2 Lite, it’s in gold color. One other major change is on the rear side, and it’s the dual camera with a dual tone LED flash. Except for these changes, the rest of the design is same as in Nubia M2 Lite.

The build quality of Nubia M2 is exceptional. After testing its sibling, I was excepting the same, but the build quality of M2 is way better than many smartphones I reviewed. It has a gorilla glass on its display, and the dual camera lens is covered by sapphire glass. The gold lining perfectly compliments the black, thereby giving a premium look. The phone’s grip is firm, and not slippery. But the only concern is the dust getting collected on the rear side. Overall, the phone looks stunning, and I’ve got a strong gut feeling that it can totally withstand the drop from heights.

It has a 5.5′ AMOLED display with 1080p resolution. As like every other new smartphone, it has the 2.5D curved glass which is protected by Gorilla Glass. There was no mention on which version of gorilla glass is used, but I feel it could be Gorilla Glass 4. The colors on the display are vivid, and I totally felt the true experience of 1080p. The auto brightness is perfect, and the screen always lit up when I went outside. I didn’t find any glareness when using the phone under the sun. 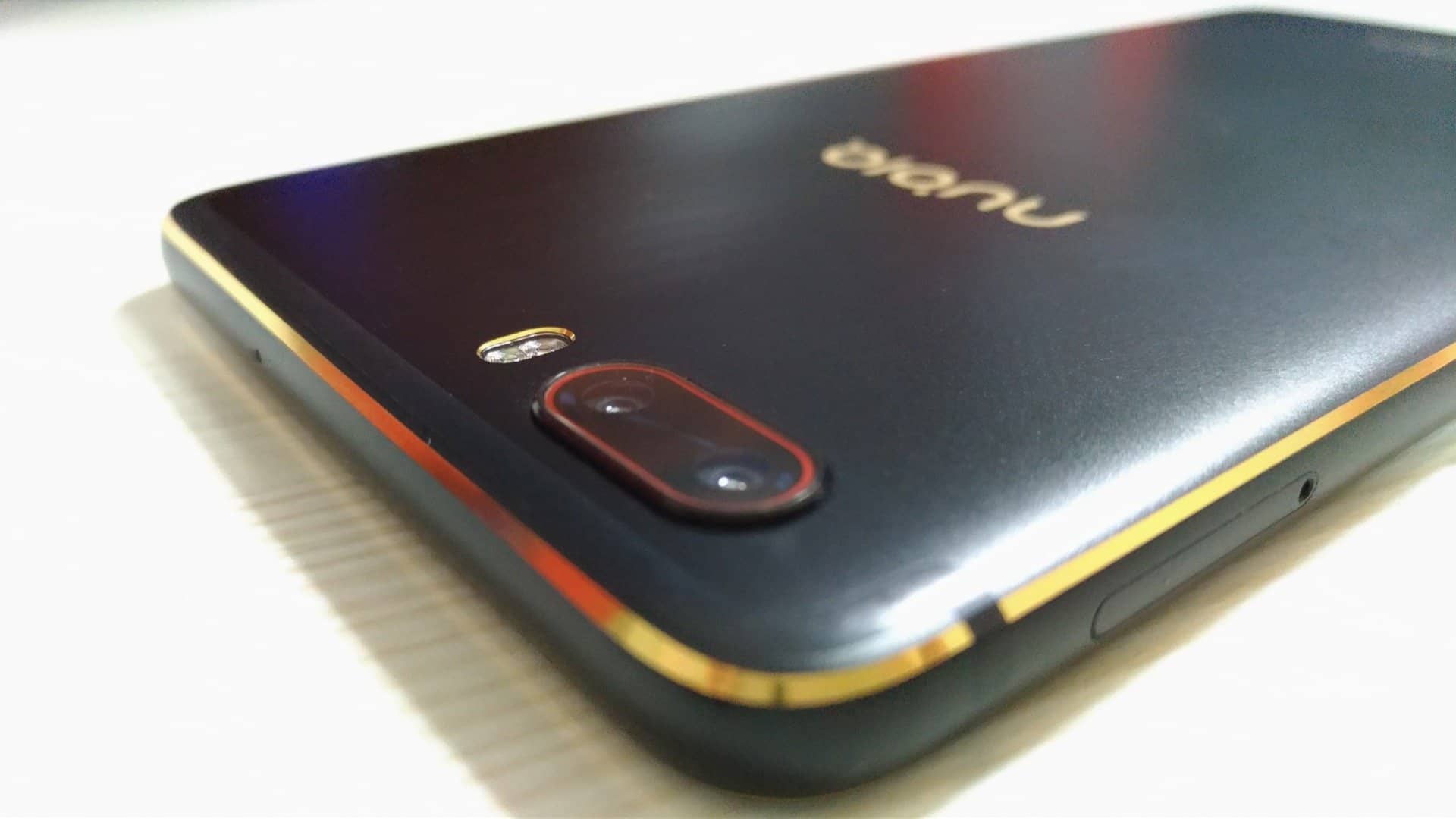 Though it has the same 13MP Monochrome +13MP RGB dual lens with f/2.0 that can be seen in most of the dual camera phones now, the outputs produced by this phone’s camera makes a difference. I can strongly say, the NeoVision 6.5 technology has been perfectly optimized for both hardware & software, and you can totally see it from the camera samples below.

The bokeh effect may not be perfect, but the DoF is brilliant. The portraits produced are stunning and it totally depends on external lighting. The blurred backgrounds can be adjusted on real-time, or even after the picture was captured. But, the major problem I faced is while focusing the object. The hybrid auto focus doesn’t really work in portrait mode, but in the normal/ HDR mode, the auto focus is really fast.

Even under low-light conditions, there wasn’t any noise. The selfies are pretty neat, and the beauty mode doesn’t add any artificial skin tones. Again, I couldn’t find any noise while using the front camera.

The rear cameras are capable of shooting 4K videos, and unlike in LG V30 or Note 8, I guess only one of the lenses work while recording. So, except in the portrait mode, I don’t think the second camera on the rear side is much useful.

Nubia M2 is powered by a 2.0GHz Qualcomm Snapdragon 625 processor which also powers ZenFone Zoom S and the new Mi A1. But, the M2 is still running on Android v6.0 and there’s no update on whether it can be upgraded to Android N and O. There wasn’t any bloatware, but I dislike the Nubia UI since its inception. Some of the smartphone users like me don’t want any icon on the phone’s home screen and want to view a panorama style wallpaper which can’t be possible using Nubia launcher. So, I had to use a third-party launcher.

From the performance point, the phone runs pretty smooth. I’ve been using ZenFone 3 from a year now, so I don’t have to talk a lot about Nubia M2’s performance. The Snapdragon 625 is optimized for both performance & battery and practically doesn’t heat up. I never faced sluggish nor even a bit of lag while using multiple applications. Even the gaming was pretty smooth.

The benchmarking scores are pretty decent, and below are some of the insights. Have a look –

Only a few of the gestures look pretty useful for me, and the rest were annoying. The three finger screenshot shortcut and the brightness adjustment come pretty handily.

The fingerprint sensor is embedded in the home button, and it’s pretty fast. Irrespective on whichever angle you used, it quickly recognizes the thumb and there’s no delay. 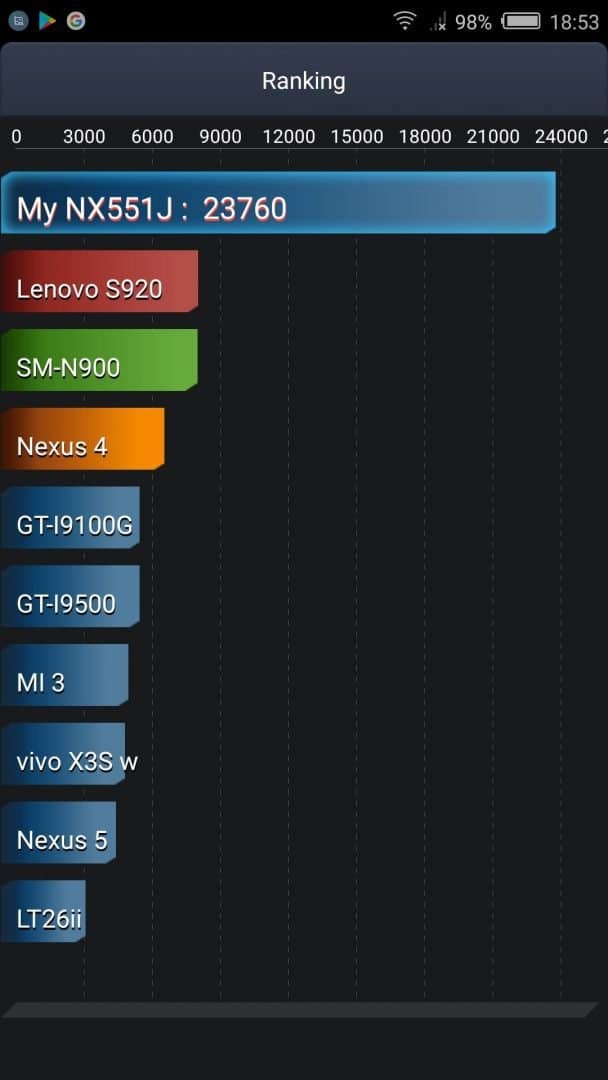 The battery life is pretty decent. As already said, the phone doesn’t have any bloatware and the processor is pretty much optimized, the phone could totally live for more than a day. There are several optimizations we can do on the phone like restricting CPU usage, turning off the network when not in use, etc. These settings could further improve the battery life.

The Pros and Cons:

The advantages of owning Nubia M2 is hiding the flaws, but the purpose of introducing the dual camera on this iPhone clone is to replicate the bokeh effect. So, if you’re looking for a decent camera phone with a good DoF and performs smoothly, then this could be one of your choices.

P.S: The newly launched Mi A1 have the same specifications and has a disruptive pricing. Hit us with any queries if you’ve any in the comment section.