Oct 17th: Battle of two Phablets in India – Galaxy Note 4 vs iPhone 6 Plus

We have already seen iPhone 6 and iPhone 6 Plus sales records around the world, in 3 days, the sales of iPhone 6 reached 10 millions ( comparing to be a big hit than the yester year 2013-iPhone 5S sales) and the pre-orders are already rolled out in all the e-commerce websites like amazon, snapdeal and Flipkart, After confirming the pre-order date, the release day is also confirmed in India 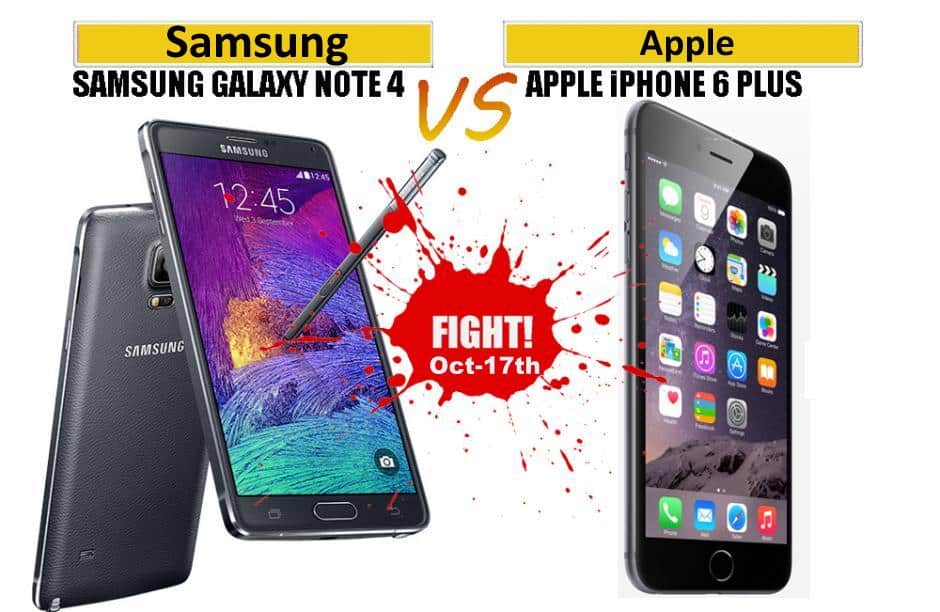 Now let’s get back to Galaxy Note 4, Samsung sent the invitations that it is going to launch the Next Galaxy tomorrow ( Oct 14th ), we can guess it will be Galaxy Note 4, so the pre-orders will begin from tomorrow, now a tweet by Manish Khatri confirmed that Note 4 will also release on Oct 17th, so we think it’s going to be a big day in India,

Even the Samsung Mobile India also tweeted that there will be a launch event tomorrow.

We’re excited for the big reveal, are you? #GALAXYNote4 #IndiaLaunch pic.twitter.com/nIWvc3q17R

Samsung Electronics during it’s World tour in Korea also confirmed that, this time the release of Note 4 will be prestigious and it’s planning to release in 140 countries by the end of October, and now it’s time for India to experience the all new Galaxy Note 4

Right now there will be a doubt in the smartphone lovers whether to choose Note 4 or iPhone 6 plus, well we have seen some negative side of iPhone 6 Plus, like #BendGate, #HairGate and some failed drop tests, and even the benchmarks of iPhone 6 Plus were not upto mark comparing to it’s sibling iPhone 6, but still Apple is the no.1 in it’s sales

Thinking about Note 4 bend test ? we have seen samsung trolling Apple’s #BendGate by showing it’s Galaxy Note Edge screen, and to stop the annoying reviews on bend tests of Note 4, Samsung released the official video to put a full stop for this, and you can watch the Note 4 drop test below
[youtube https://www.youtube.com/watch?v=Jj3Jy5ufhaY]

The price tag of Note 4 is not yet revealed, hoping to see the price of Note 4 to be in the same range as of iPhone 6 Plus, we know Samsung always want to give a competition to the Apple products, recently we have seen the launch event of Samsung Galaxy Alpha- the thinnest smartphone from Samsung in India hoping to become a competitor of iPhone 6, oops we are hoping the Galaxy Note Edge too, but there isn’t any information on this :(

So, Which Phablet will you choose on Oct 17th ? whether it’s a Galaxy Note 4 or Apple iPhone 6 Plus ?