Let’s recap a bit about the quote from our old post: Over the past months, we’ve seen tremendous interest from India, despite not having launched there. We have many customers in India purchasing to the US, and then asking a friend to bring it over or trans-shipping it. Some have even purchased the device from scalpers. Looking at our traffic, India ranks number 8, outweighing many of our launch countries.
Now, we don’t have to wait for our friends from USA to bring the OnePlus One, as per the teaser from Amazon.in , it’s confirmed that Amazon got the rights to sell the OnePlus One smartphone in India

RT this tweet & tell us what’s #TheOneThing you’d give anything in the world to have. pic.twitter.com/9KY45kBhJK

//platform.twitter.com/widgets.js
There’s another contest running on OnePlus One official forum (India) it’s #NeverSettle contest, you can read the more info from the image below 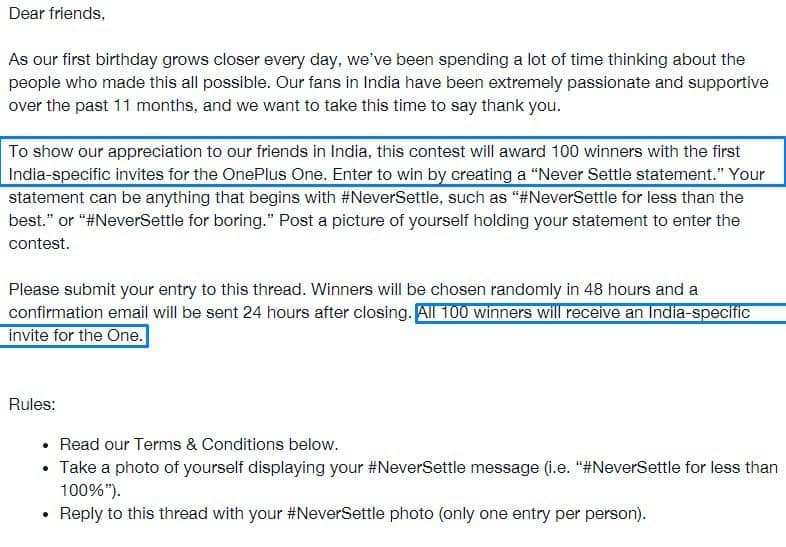 The lines marked in Blue also confirming that OnePlus One invites will be used by Indians too, so there will be a launch event soon next month (December, our old report also confirmed that OnePlus One will launch in December)
The price thing and the official launch date is yet to confirmed, but as far as we know OnePlus One 64GB is supposed to launch at a price of around Rs 25,000/- ($400) and the official launch date will be soon revealed, we hope to see the launch date after finishing the contest running by Amazon India.
Incase you need to know more about the OnePlus One and why it’s called the Flagship killer of 2014, have a look at our review! we already posted a detailed way to get OnePlus One smartphone to India and you can find the links below
0
0
0
0
Share 0
Tweet 0
Pin it 0
Share 0