Vivo, the camera, and music company that is known for aggressive marketing reached heights with their selfie smartphones. The company was always first in adopting the latest trends. In fact, Vivo was the first to introduce the in-display fingerprint scanner in its smartphone. Also, it became the first company to reveal an entire smartphone without bezels. Recently, the Chinese company launched its flagship device Vivo V9. It was one of the first Android notch smartphones to be launched in India.

I had a chance to explore the device for a while, and I am assuming you probably read my experience on my hands-on review post. I had a little time testing out the device features but recently I got the device for full-fledged testing. So, this is my complete review on Vivo V9. 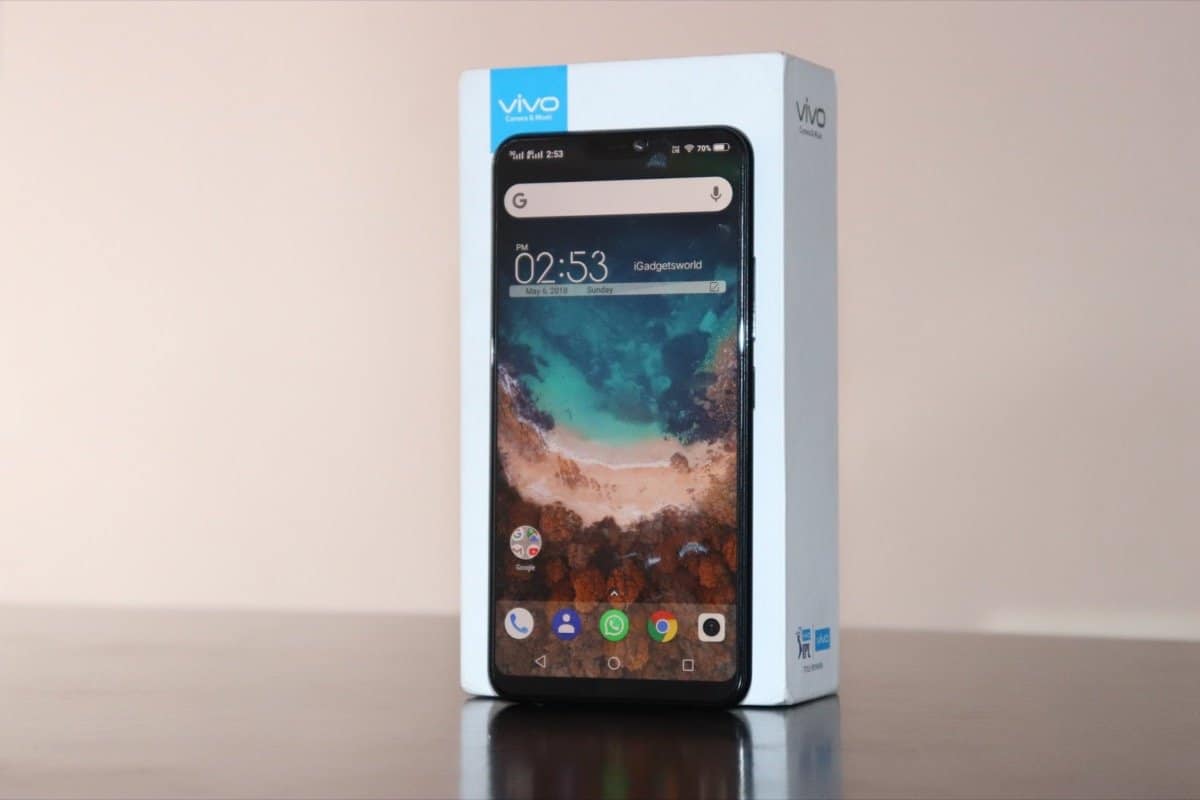 In my hands-on review, I’ve already explained a major portion of the device’s features, so let me just jot down the main specifications of the device.

The device specifications are top-notch on paper, but how well does Vivo V9 perform in real life? Before I answer that question, let me start the review with the design & build quality.

As already said, Vivo V9 is the first Android notch smartphone that has launched in India, but the entire design including the notch is inspired from Cupertino’s iPhone X. iPhone X is actually the very first smartphone to introduce the notch, and the rest is history. There are many differences you can notice in the Vivo V9’s to iPhone X’s design. Firstly, the notch on V9 is smaller as it doesn’t use many sensors. The chin part is a little bigger and is practically not possible to curve the display unless it’s an OLED. Also, the other reason for having the chin part is to keep the connections between the display and the motherboard. 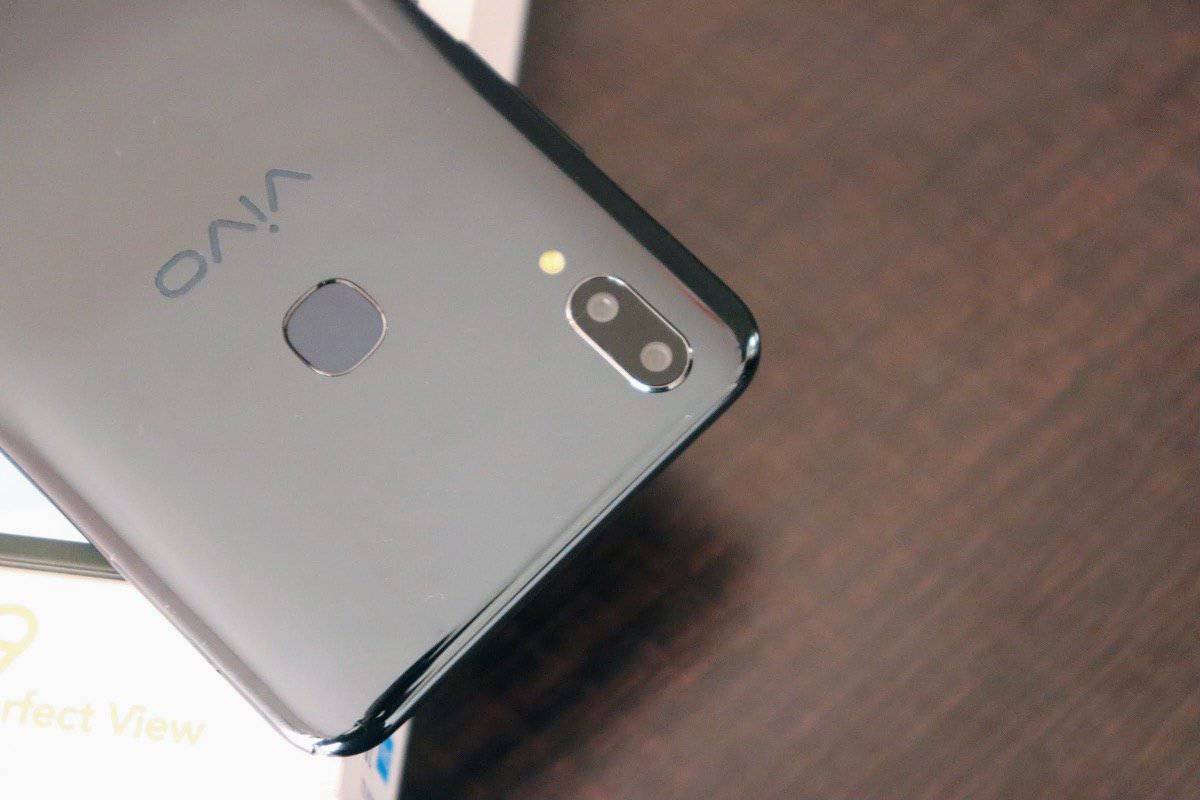 The entire phone is made of polycarbonate i.e., plastic-built. Though it doesn’t have a glass on the rear nor support wireless charging, the rear side looks glossy and I wonder why Vivo made it reflective? The fingerprint scanner is placed in the top half where the index finger can usually reach. One more inspiration from the iPhone X is the vertical placement of dual cameras, but they don’t pop-out much. 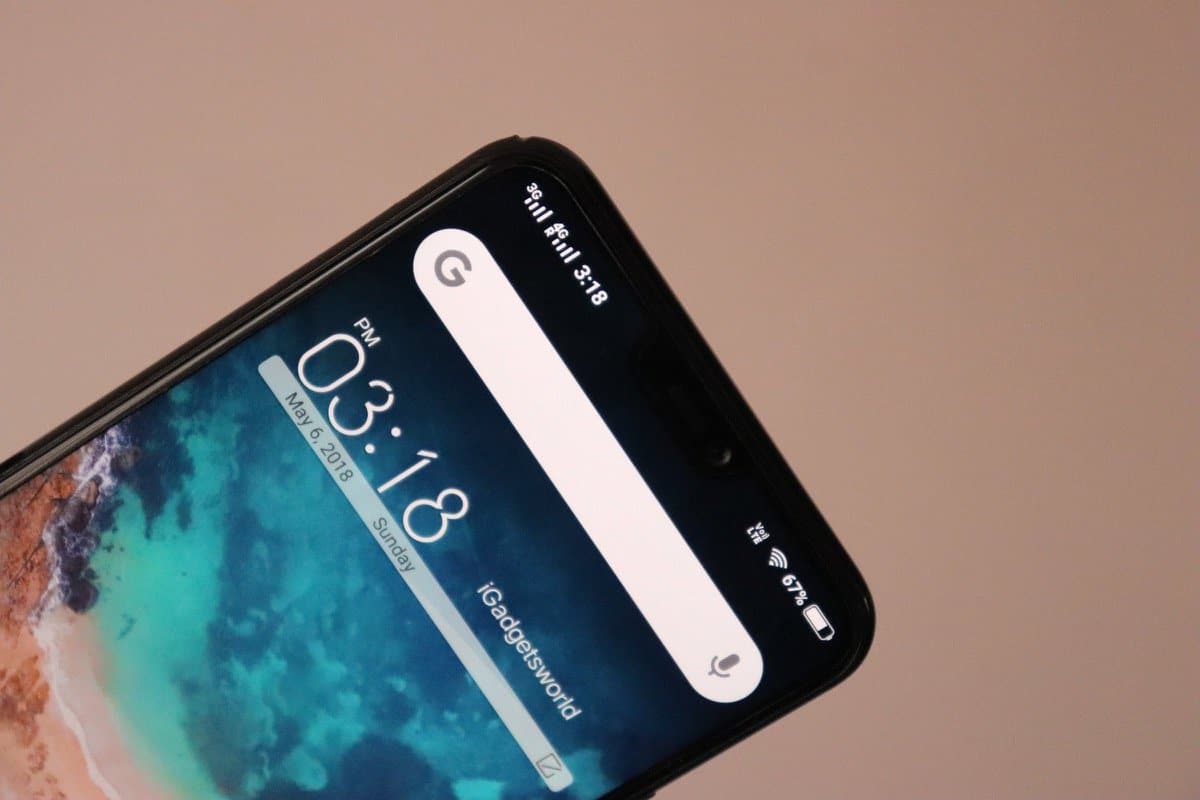 On the front, you see the most hyped ‘Notch’ at the top. It’s very small but does distract you from the view. The Ambient light sensor, front-facing camera, and the speaker reside in the notch. On the right, you’ll find the volume rocker and the power button, and on to the left, you’ll find the SIM+microSD card slot. At the bottom, you’ll find a 3.5mm headphone jack, mic, micro USB port and a speaker grill. 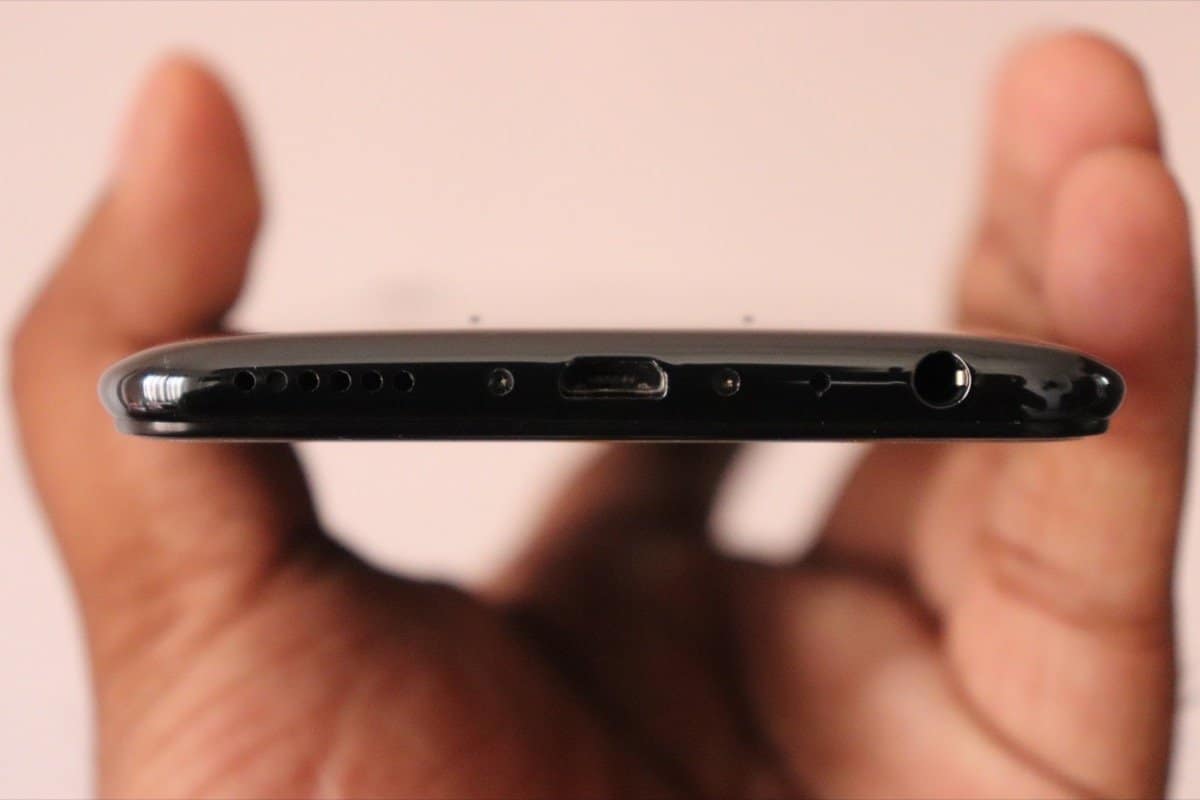 As mentioned already, the phone is plastic-built so it doesn’t weigh much. It’s very lightweight and you don’t feel like having it in your pocket. It’s not slippery and does hold a good grip. But the biggest drawback I see is in its build quality. I accidentally dropped the phone, and it left a dent at the extreme top-left corner. Now I’m very scared of taking out the phone. So, I strongly recommend buying a case for the phone, or you’ll regret it later. 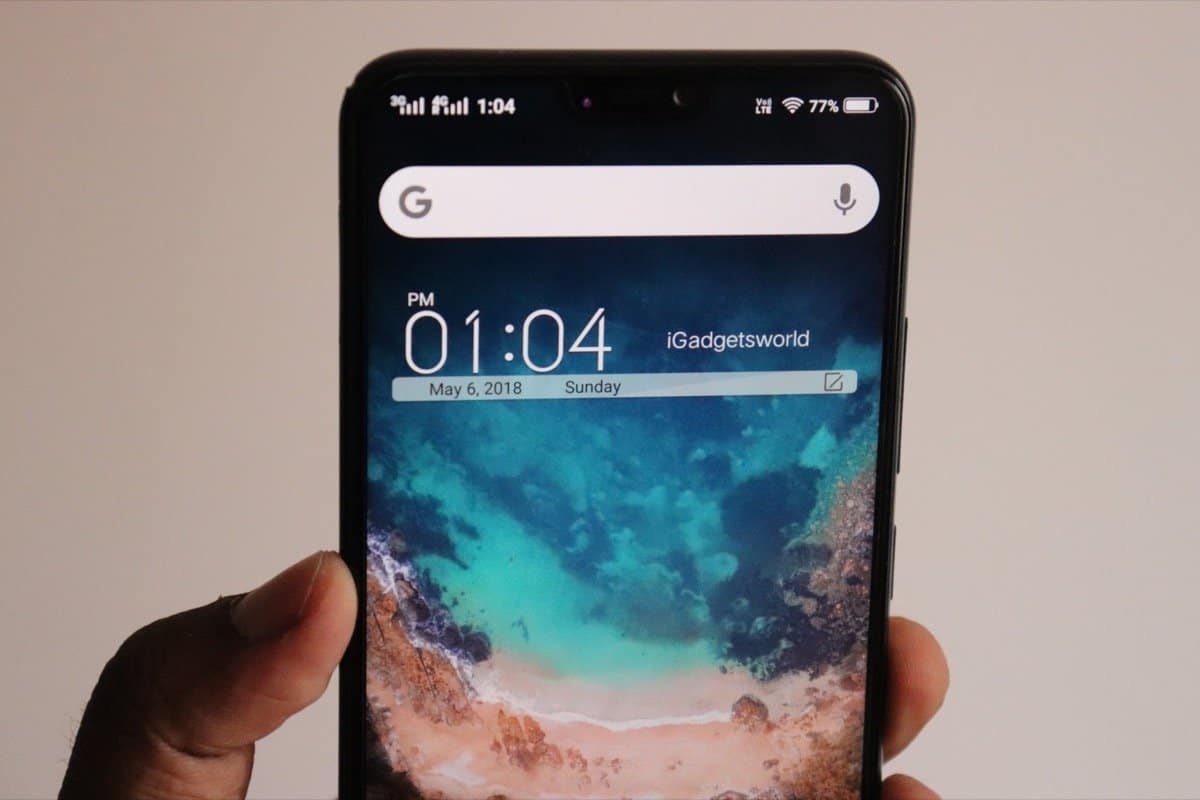 The display is one of the main USPs in Vivo V9 as it offers a 19:9 FullView display experience. I enjoyed a lot watching videos on YouTube and movies and didn’t find the ‘notch’ as a distraction. Once you get to experience it, you’ll forget that there’s a notch in it.

Not every application supports ‘notch’, so whatever be the optimization the phone’s doing is just to give a good experience. What I understood from the optimization is it’s just inheriting the same colors from the app and starts showing at the top. Also, there’s no way you can disable the notch and make it an 18:9 display. The colors in the display are good, but not the best. It uses an IPS LCD display, so you can’t expect more from it. However, I did enjoy the full view experience. 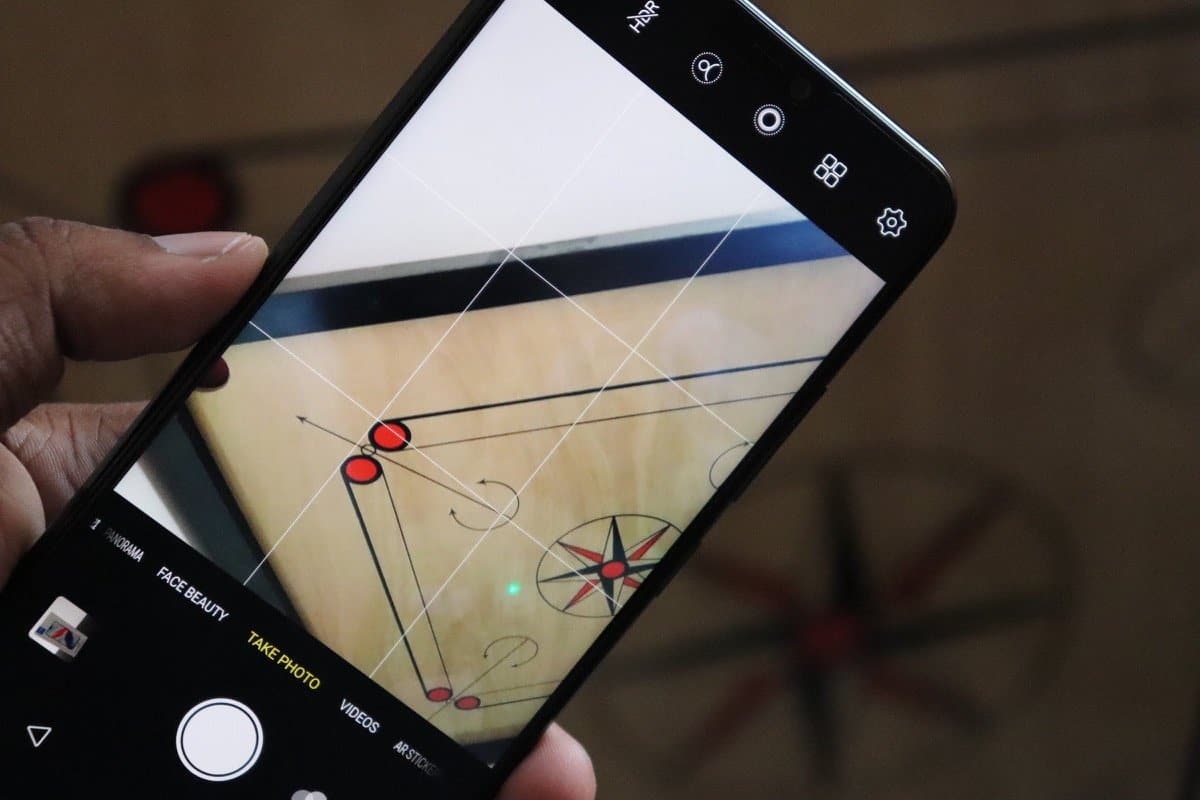 Cameras are usually the main asset in Vivo smartphones, and the new Vivo V9 is not an exception here. I’m very much impressed with it and well, the cameras have got some sick tricks under the hood. The rear camera has excellent auto-focus and has a fast response while locking down to the object. The color levels, brightness and contrast levels, saturation levels are way beyond my expectations. Overall, the color reproduction in the output is top-notch. Before I move further, take a look at some of the camera samples of Vivo V9’s rear camera.

Aren’t those amazing? The shutter speed is great and well, at first I thought that it may cause some terrible images, but the sharpness levels are very nice. 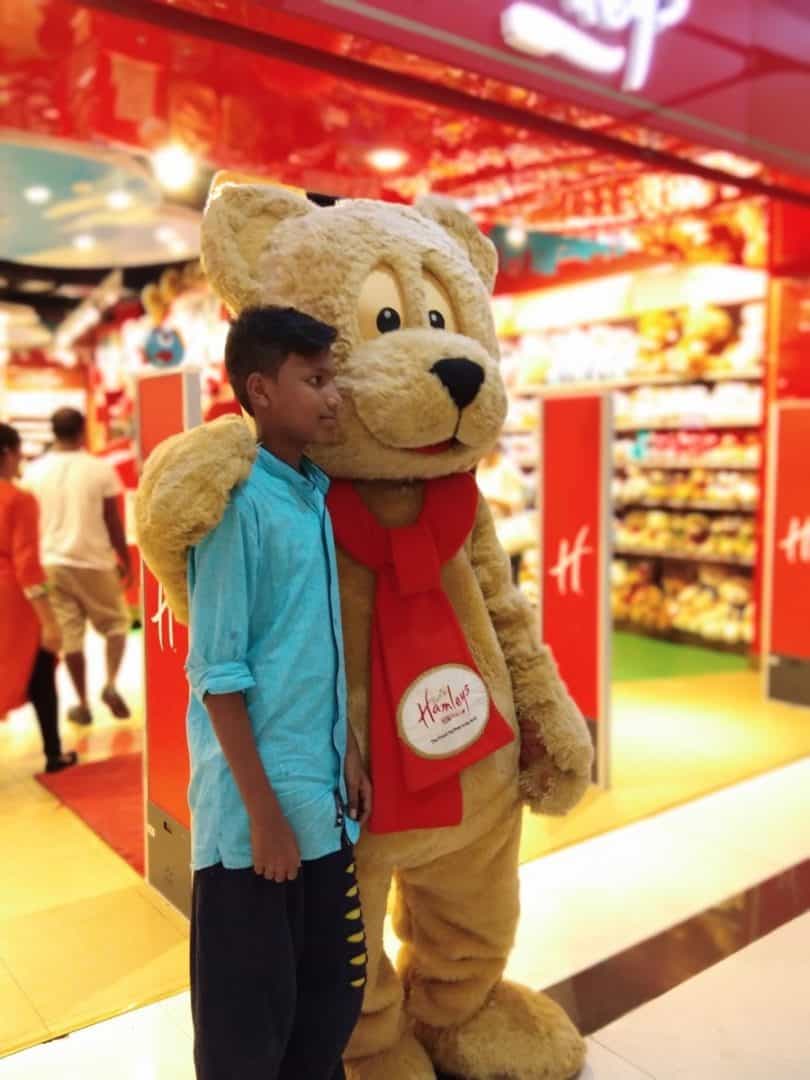 The Vivo V9 captures portraits, that are perfect if you do not examine pixel by pixel. Thanks to the AI algorithms, the bokéh effect is top-notch. The edges and the background blur efficiently compliments the focused region. It does give a chance to change the blur & focus area, and it’s quite common to see in the recent smartphones. 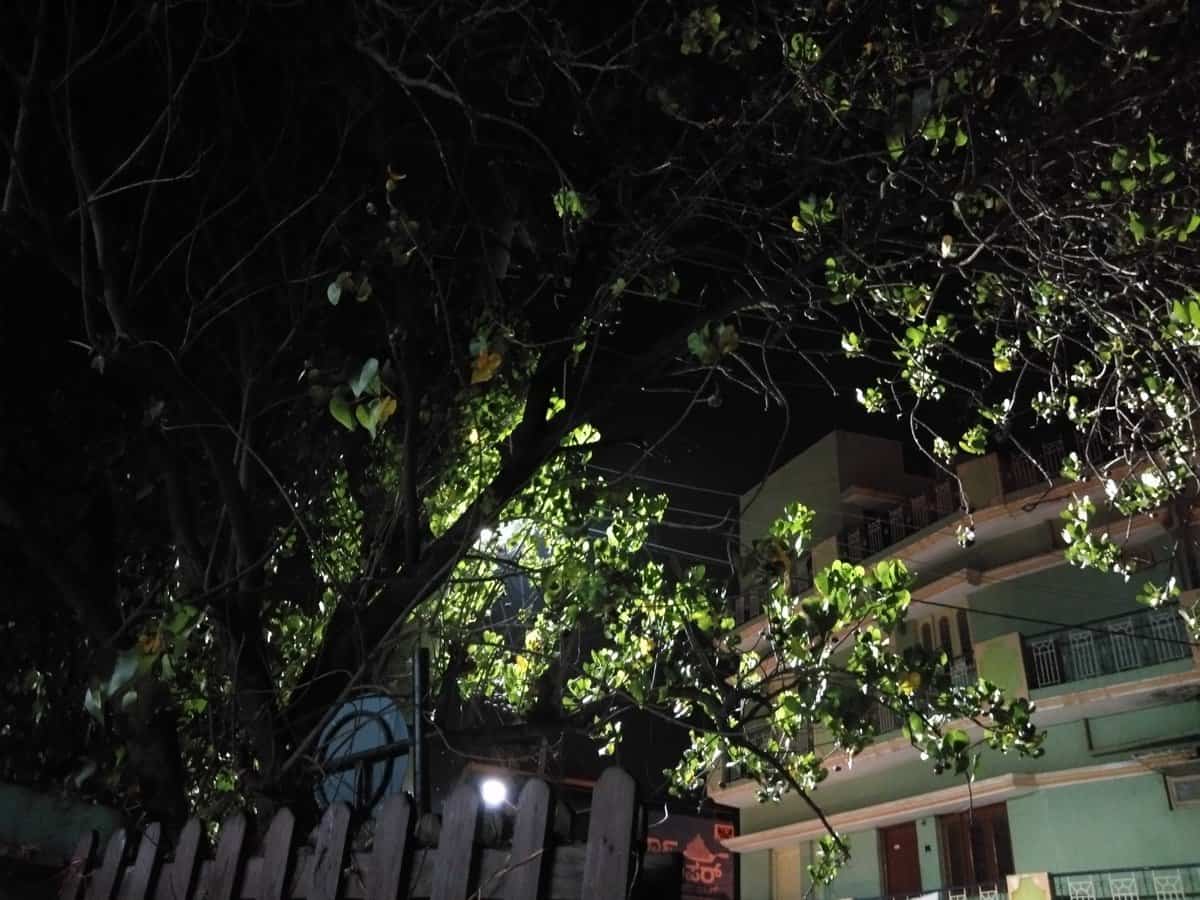 Even the pictures shot in low-light came out without noise. I didn’t expect that Vivo could produce at greater levels. No wonder, why it’s their flagship device.

There’s a 24MP selfie camera on the front-side, backed by AI, as the company said. But I honestly don’t believe when a company uses the term ‘AI’ because it’s just trending and in case of a few phones, AI actually boosts saturation and contrast levels to a point where the images look kind of artificial. And on this phone, the regular selfie beautification is fine. The front camera also takes portrait shots, but the shots I took didn’t seem to be as good as the photos were taken using the rear camera.

But the normal selfies look brilliant. The color levels are not saturated and the output delivered looks great in good lightroom. However, in low light, the screen brightness the display to lighten the display and that’s when I started noticing the noise. There’s no way that the company can keep a LED flashlight at the front as the notch is already occupied with other things.

You can check the complete camera samples of Vivo V9 here in this album.

Qualcomm Snapdragon 626 is both powerful as well as power-efficient. I didn’t find any lag or sluggish when using the device. In fact, it is a bit surprising that a mid-range processor is handling everything so well, whereas the phone has a custom skin on top of Android 8.1.

The new FunTouch OS 4.0 on top of Android 8.1 does deliver a fresh user experience. Again, Vivo took the inspiration from iPhone X and gave the same UI for an Android phone. From the icons to the notification center, everything seems to be an inspiration taken directly from iOS. Why not you take a look at the screenshots below?

Overall, the UX is pretty neat and It did deliver the same fastness I would experience in an iPhone.

There are a few things which I didn’t like in the V9 and one of them is the bloatware. I can’t disable it nor uninstall these applications. The launcher is kinda not so great in my opinion has lesser utility focused features, so I just installed the Nova Launcher and I was fine with that. This is the only thing that bothered me.

Vivo V9 has both ‘Face Unlock’ as well as ‘Fingerprint Recognition.’ Both security features are ‘fast AF’. The fingerprint recognition is pretty accurate and is very responsive. Literally, there’s no delay. I can say, I’ve never seen such fastness in a mid-end device.

Even the face unlock is pretty fast. On the low light, the phone auto enhances the brightness to recognize your face and I’d say it’s very accurate. Like in OnePlus 5T, the Vivo V9 has the fastest face unlock I’ve ever seen.

Also, just like the iPhone X, you can just raise your mobile and keep it towards the face to unlock. Here you don’t have to wake the screen or push the power button, and the phone unlocks instantly. That’s one more inspiration, but a much-needed feature.

There are quite handy features in the Vivo V9 that totally made me keep it as my primary phone. The first is the App clone which has become a quite common feature in many smartphones now. The phone does support two SIMs as well as a dedicated microSD card slot, so supporting two accounts in the same IM are quite mandatory. The other feature is Smart Split. It’s very similar to Messenger which appears as a floating icon when it’s minimized. Likewise, it supports different social media apps which appear as floating icons even when you are in a different application. If there’s a message and you planned to read it, tapping on the floating icon splits the screen, giving you space to do two tasks at a time.

The other interesting features are Game Mode and Bike Mode. When in game mode, the phone auto-rejects the calls and notifications, thereby keeping you free from distractions. Even in game mode, you can whitelist some important contacts from whom you don’t want to miss any calls. Furthermore, in bike mode, the phone auto-rejects the calls or sends an automated message.

Though the phone has a good amount of bloatware, it hadn’t shown any impact on the phone’s performance or on the battery life – thanks to AI optimization. The software reminds you if it found any app that drains a lot of battery.

In my testing, I find the battery life of Vivo V9 is quite decent. It may not live for a day, but gives a remarkable experience when it’s ON. Overall, I find that the device could last over 8 hours in heavy usage and more than 15 hours in normal usage.

Vivo V9 looks brilliant in every way except the pricing. Within the price range of Rs. 23K, there are a lot of smartphones that give better performance but what difference Vivo V9 makes is its top notch. So, if you want an iPhone X running on Android, I’d recommend you go with Vivo V9.