Apple released iOS 8.0.2 a new update for iOS 8 in order to fix all the issues and bugs present in earlier update iOS 8.0.1 and also in iOS 8.

On wednesday Apple released iOS 8.0.1 update as there were many bugs and issues reported in present iOS 8 , so Apple released iOS 8.0.1, as per CNET report, more than 40,000 users installed this update in an hour after it’s release, but the update itself seems to be a bug, this iOS 8.0.1 update had many issues like the touch ID doesn’t work, Network connectivity issues etc and makes the iPhone useless , so most of the users reverted back to iOS 8, and you can see the procedure to downgrade from iOS 8.0.1 to iOS 8

In order to fix these bugs, Apple removed the iOS 8.0.1 after 1 hour of it’s release, but more than 40k people had their chance in upgrading it, yesterday Apple released another update mentioning all the bug fixes :

This update is supposed to released after some days but Apple made it in one day and released yesterday to fix the bugs! 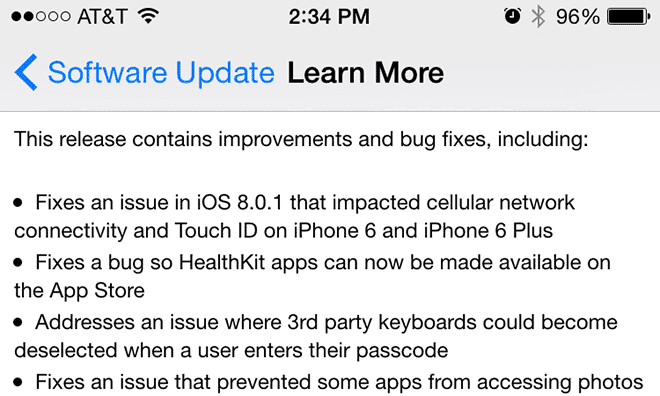 Just try update this by  going to Settings > General > Update or using iTunes software with a MAC or PC, reports suggesting that Touch ID and Network issue is fixed but still many bugs need to be fixed and still there is no information regarding those bugs

Note : If the update in your Apple device showing iOS 8.0.1 ( in some cases it’s showing ) just go to Settings > General > Usage > Manage Storage and delete it and with this i hope you can see the iOS 8.0.2 update.

Still there is no information regarding the botched iOS 8.0.1 update and Apple said “We apologize for inconveniencing the iPhone 6 and iPhone 6 Plus users who were impacted by the bug in iOS 8.0.1.”  Hope there won’t be any more problems with this iOS 8.0.2 and comment if you still face any problems in this new update