Motorola Moto 360 smartwatch has been listed in Flipkart site and the sale will be started soon, but the price of Moto 360 is not yet mentioned and as per the listing only Grey color is available

Earlier in IFA2014, Motorola came up with 4 gadgets, supposedly 2 successors of it’s smartphones, they are Moto G (2nd Gen), Moto X (2nd Gen) , Motorola’s New Bluetooth headset and the very first smartwatch from the Motorola that is Moto 360 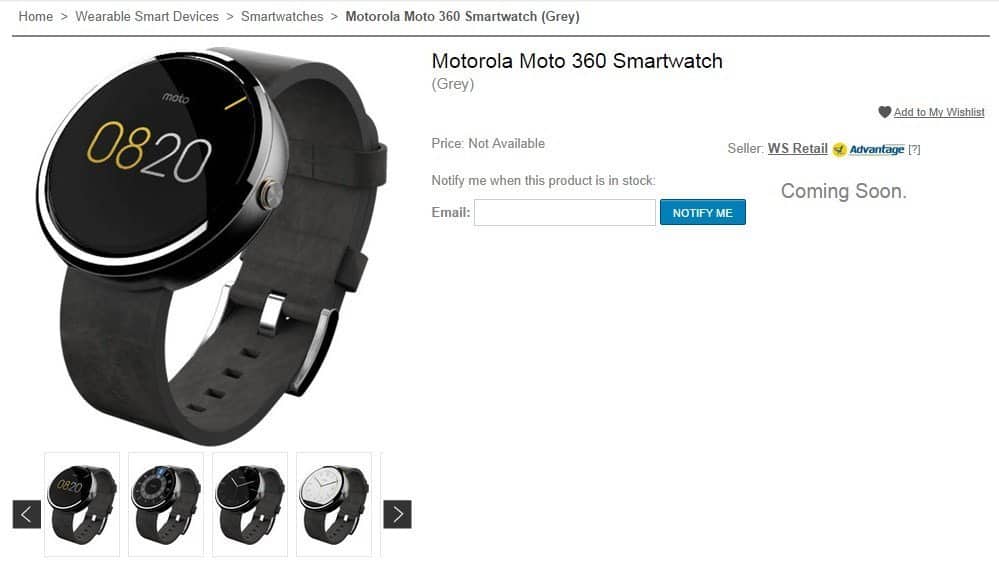 There were lot of leaks and rumors on this smartwatch, and finally on Sept 5th, in the iFA 2014 expo, Motorola unvieled it’s first smartwatch Moto 360 with spectacular specifications, we also mentioned this smartwatch in out Top 5 smartwatches list, and the price range is fixed as $249.99 (for leather band) and $299.99 for steel band, earlier it is also noted that this smartwatch was on pre-order in bestbuy eCommerce website, but the official price of Moto 360 in India is not yet revealed yet, but it should be less than 15K

Earlier this month Motorola launched it’s 2nd Generation Moto G (2014) (Successor of Moto G (2013) and the sales were not as expected (due to the Xiaomi redmi 1s and alternatvies for this smartphone) and they followed the same Flipkart strategy, Now Motorla wanted to get back into the competition and made Flipkart to officially list the Moto 360 smartwatch, even before it’s release many of the users attracted to it’s specs and the wireless charging thing, now the time came to test that, the sale of this smartwatch will go on sale as expected in this month and now it’s official

We are hoping the Moto X (2nd Gen) will also be go on sale as these devices can be easily connected and the experience of using these devices together brings a new lifestyle , Moto X (2nd Gen) is also listed mistakenly in Flipkart and this made us to think that these both devices will go on sale before the end of this month or on the first week of October, but we can’t expect the same day release of these 2 products, as Users tend to buy one by one !