OnePlus 2 Review: Is it really the most hyped smartphone of 2015?

There’s a blind belief in movies, the one which gets huge hype will definitely show worst performance. It may be due to the over expectation or the movie might really be a disaster. The same logic applies everywhere. Before the official release of OnePlus 2, all the blogs & social media were occupied with rumors and leaks. Eventually, the rumors became true when OnePlus started revealing their specifications one by one.

This strategy of revealing specifications one by one increased the hype over the phone. It was the first phone to have a tremendous launch using the Virtual reality ( OnePlus sold some limited amount of cardboard VR’s for this). This is the first phone to feature USB Type- C and more over the second phone to feature 4GB as RAM. There are several cases in Social Media which really helped OnePlus to get the hype.

At one moment everyone thought the new invite system will definitely help the users to get their hands-on the phone and OnePlus team had already promised that the stock is comparatively big besides OnePlus One.

All these factors made OnePlus 2 to be the most hyped smartphone in 2015. In addition to this, OnePlus claimed that the flagship will be a competitor to the smartphones releasing in 2016 but not in 2015, thus naming it as “Flagship killer of 2016“. Finally the release date came in and everyone shouted for invites, all the Facebook groups, twitter accounts were filled with requesting invites, but the result was opposite. The new invite system doesn’t help the normal users to buy the phone, even we didn’t have a chance to buy it on the first sale, Luckily one of the insider from OnePlus provided us an invite to claim and buy the phone for review.

Well, what exactly happened? Why so hype about this phone? Does it really reach the hype or just a marketing gimmick? Let’s know more about this from my review.

I’ve not thought of writing a long introduction, but this phone made me write. In the end, You will come to a conclusion on this flagship and I am very sure about it. Anyhow, let me take you into the journey of the most hyped smartphone this year.

As like every other fan, I was very curious to have an experience with the phone, so as soon as I received an invite from the OnePlus team I bought it without a second thought and chose same day delivery option. I’ve taken some unboxing pictures which you can see in the below gallery.

My first view on the phone is obviously positive and never took the rumors to my mind because I want to test myself and confirm whether the hoaxes are true or not. Before giving the conclusion, let me talk about the specifications one by one.

The size is 5.5-inch just like the old flagship OnePlus One but from the design view everything is changed. Though the phone weighs more than the One but from the dimensions-wise it got reduced. Few things worth mentioning is I didn’t find any logo on the front screen, just a plain screen with backlit capacitive keys & a fingerprint recognition button. However, on the rear side the OnePlus logo resides just below the camera.
Coming to the sides, there’s a new priority notification alert slider which really helps during meetings. This is a new addition over the phone and on the other side as usual there’s a volume rocker with power on/off key. 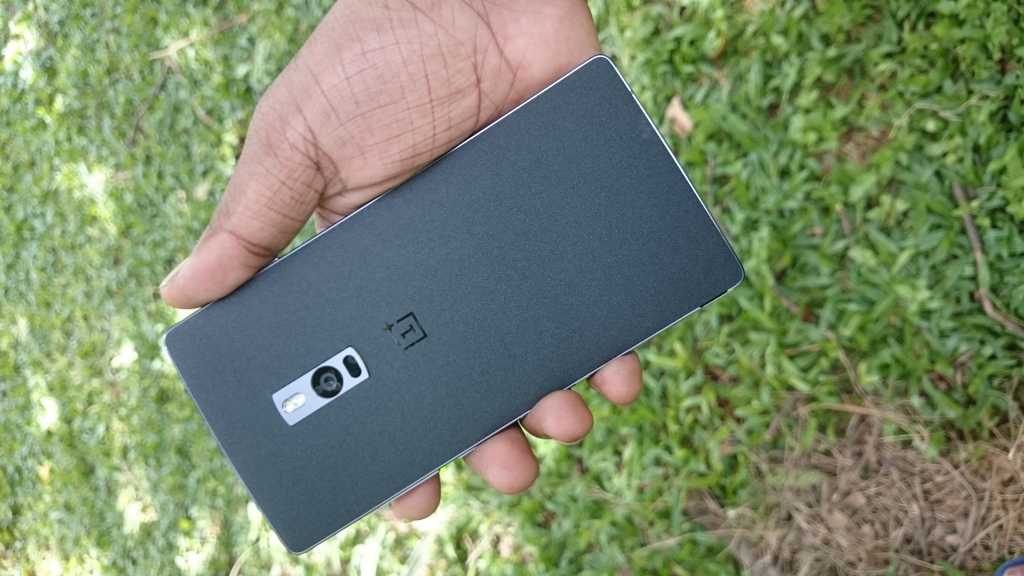 What interests me more is the metal rim around the phone which is always cool when the phone is idle. I always had this behavior on keeping the phone sides in touch with my skin as the sides are too cool :p As usual on the front-side there’s a 3.5mm audio jack and on the back-end USB port with speaker grills are present. Just like the alert slider, USB Type-C is a new additional feature in the phone. 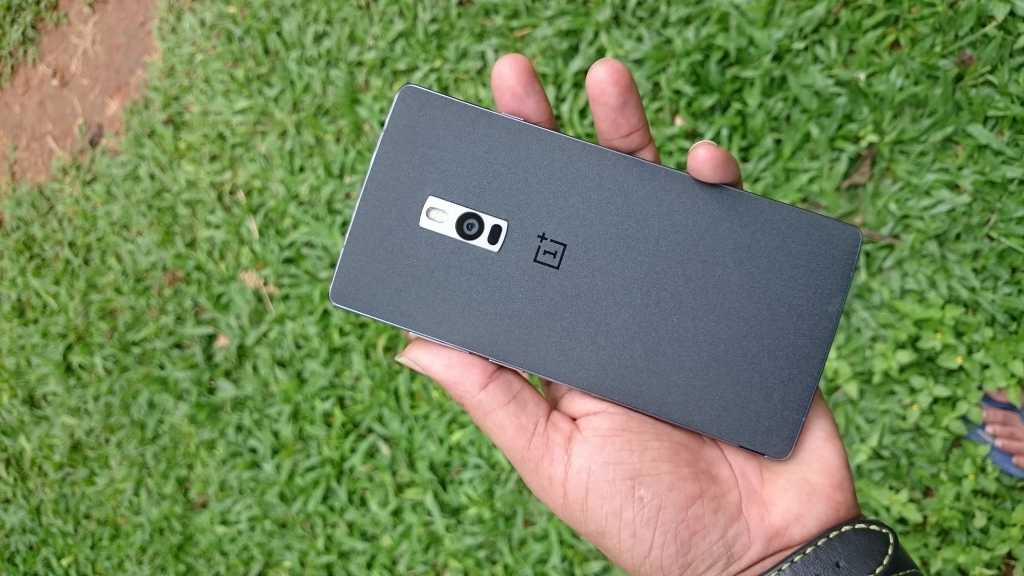 Design wise it blown my mind, simple yet elegant design with innumerable features. As it is a flagship, obviously the design should be innovative and it clearly reaches the mark ( as per my opinion)
The next main part is the display which made my mouth shut :p

If there’s something that should be discussed well in a review is obviously the Display, after all we’re going watch the display right :p Anyhow OnePlus lived up with the expectation as far as I concern, the 1080p display with 401ppi is perfect for watching high-definition videos. Even the viewing angle is wide (178 degrees) making it perfect to watch from any angle. Specs apart, what I really liked is the auto-brightness! I usually browse during night times and I didn’t have any eye strain while using the phone. It automatically adjusts the screen brightness based on the environment lighting conditions. All the new phones have these feature but the fastness of adjusting makes the winner and on my test, OnePlus 2 proved it to be the winner. The latest update brought few more changes in the display brightness, you can choose cooler or warmer mode for the display.
Heading over to camera dept. to see a sample pictures!

The biggest change that can be seen on OnePlus 2 comparing to its ancestor is the Camera department. There had been a lot of negative reviews on OnePlus One front-camera, although it is of 5MP, the quality of the pictures are not sharp & crisp, thus making it a bad selfie phone. Guess what! OnePlus 2 Camera is far better than some of the smartphones at the same price tag. Here are few sample pictures I shot using OnePlus 2.

Now you got it right! The rear camera (13MP) with laser autofocus feature makes it possible to take every picture with every detail. The camera app in the phone has pretty decent features. You can take time-lapse videos, slow-motion videos and can shot pictures in different modes like beauty, HDR mode and so on.

The phone runs on OnePlus’s own Oxygen OS made out of Android 5.1 Lollipop. The UI is neat without any bloatware. A special notification bar (slide left to right) on the Homepage is given which shows recent apps, recently contacted etc. Remaining & all are based on Google launcher. Like the Samsung, OnePlus isn’t adding any special apps except the Amazon app and you know why it is pre-installed right? :p Full explanation about the UI can be found in the Performance section. Head over to it :)

A 4GB of RAM, A Qualcomm Snapdragon 810 Chipset inside along with a 1.8GHz octa-core processor & Adreno 430 GPU makes this flagship as a beast of all the smartphones. These are the high-end specifications that can be seen in recently released smartphones from Samsung, LG & Sony but what makes this flagship different is in the pricing. There are few features that are missing but as for Indians, this phone worths every penny.

Coming to the performance, I never experienced such a fluid UI in any Android phone. As it is of 4GB RAM, you don’t see any lag while accessing different apps. Talking about gaming, the GPU scored pretty well, I bet you’ve already gone through the benchmarks I provided, if not you can check it out here.

So, what about the heating issue and how is the new fingerprint sensor?

I won’t be missing the alert slider and fingerprint sensor as they are quite new for this flagship. As already explained about the alert slider, it is very useful to select the priority notifications while Fingerprint sensor is far better than old Samsung phones. Everything is in configuring for the first time, if you placed your finger in every way, then you don’t feel any discomfort while unlocking the device.

I got several questions how is it working fine with me? well, the only thing I did is properly configuring it (thanks to iPhone 6). So, there’s nothing wrong in the Fingerprint sensor until unless if your device is defective.

Coming to the main problem I faced- Heating issue. Although the sides are metal and are always cool every time, but the device gets overheated easily with minimal functioning. I observed heating issue in the following cases:

It is reported that the same issue is seen globally in all the devices and is said to be fixed with a major update.

I won’t be misjudging the price as it is perfect for the phone specifications, but the invite system didn’t live up to the expectations. Last week the invites were poured over fans, but still many of them are looking untraditional ways ( buying invites) to get their hands on the phone. Although the company is very new, there’s quite a difference in the proposal and applying them. Earlier the company head mentioned that the inventory is huge this time and every user will get a chance easily, but things now are quite different. Everyone knows the current scenario how people are buying the OnePlus 2. The one who got more invites will be selling it for 1-1.5K or selling the unboxed or opened device for 27-30K which is more than the selling price.

Things like this are just repeating and are very proportional to previous year flagship. The ola, Airtel or the latest Air Asia campaign is not helping the buyers in any way. Keeping the facts apart, let me conclude about this phone.

As per my testing, the only disadvantage I see in the phone is the heating issue which is also a major drawback. Remaining & all the phone is a perfect competitor for other smartphones. The recent Interview from the company head making the fans in not losing the faith on the company. The recent campaigns for the invite system are helping a small portion of the fan base, but things will get better when the major update for the heating issue is released.
They might have named it the most hyped smartphone, the flagship killer of 2016 but the phone is just a better upgrade for the OnePlus one & nothing more.