Yesterday Samsung in the Word Tour planned to release the Galaxy Note 4 into the market from tomorrow , but the Galaxy Edge is a limited edition one whose specs varies with region and it’s release date is not yet confirmed, in order to choose between these Galaxy brothers one need to test the smartphone, so benchmarking these smartphones plays a major role in assessing which smartphone is better 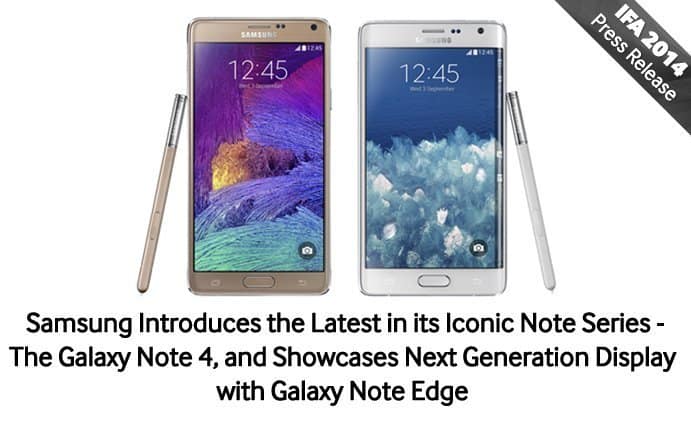 During the IFA 2014 Expo, Samsung unveiled Galaxy Note 4 and Galaxy Edge, both the smartphones have similar specs but the later has edge screen, these both smartphones were running on Qualcomm SnapDragon 805 processor at the launch event and during it’s AnTuTu tests Galaxy Note 4 performed better than Galaxy Edge, the results are very dull for the Galaxy Edge, it scored around 36,000 points in AnTuTu benchmark while the official launch time which is same as the Galaxy Note 3, so it’s not considered as more powerful than it’s other flagship smartphone brother Galaxy Note 4

The Galaxy Edge smartphone aka SM-N915L scored 47,918 points in AnTuTu which is powered with Exynos 5433 octa-core SoC processor clocked at 1.3 GHz and for GPU  Mali-T760 graphics chip is given, and you can see the test results for Galaxy Edge below 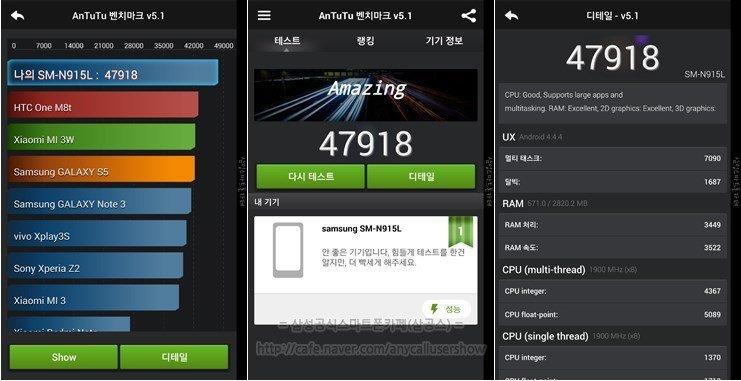 In the same way, Galaxy Note 4 aka SM-N910S scored 48,285 points when it is tested in AnTuTu which is also powered with same Exynos 5433 octa-core SoC processor clocked at 1.9 GHz and the same Mali-T760 Graphic chipset for GPU and here from the below picture you can see the test results 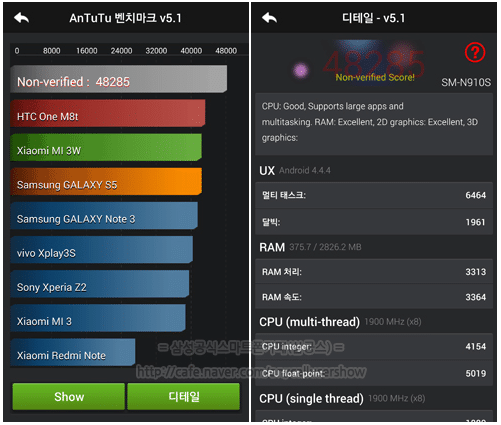 By comparing both these Benchmark results, we can clearly say that Galaxy Edge performance is as powerful as it’s sibling Note 4 as both have nearly same scores (neglecting the differences), these tests are performed when these smartphones were using Exynos 5433 octa-core SoC processor, we still need to try these tests again with Qualcomm snapdragon 805 processors as to confirm these results

when we consider the normal usage and performance there won’t be any major difference whether the Galaxy smartphone is running on Exynos 5433 octa-core SoC processor or on Qualcomm Snapdragon 805 processor, but as per the earlier test results and the recent test results the scores differ a lot depicting the performance issues, so we are waiting for the launch of Galaxy Note 4 tomorrow, so we can test it out!