The camera & music company Vivo has a kick-ass year, and to put things straight, the Chinese company made huge sales with their first notch-phone – Vivo V9. Later, they launched the world’s first in-display fingerprint scanner phone, and the almost bezel-less smartphone – Nex but nothing could cope with their ‘V’ series smartphone – V9. Now after almost 6 months, the Chinese mobile brand is coming with the next iteration – Vivo V11 Pro which is launched today at a price of Rs. 25,990.

I had a chance to explore the V11 Pro, thanks to Vivo India for arranging a unit. I may not be able to justify everything in this hands-on experience article and would recommend waiting for my complete review. However, I’ll be covering my first impressions here, so let’s get started! 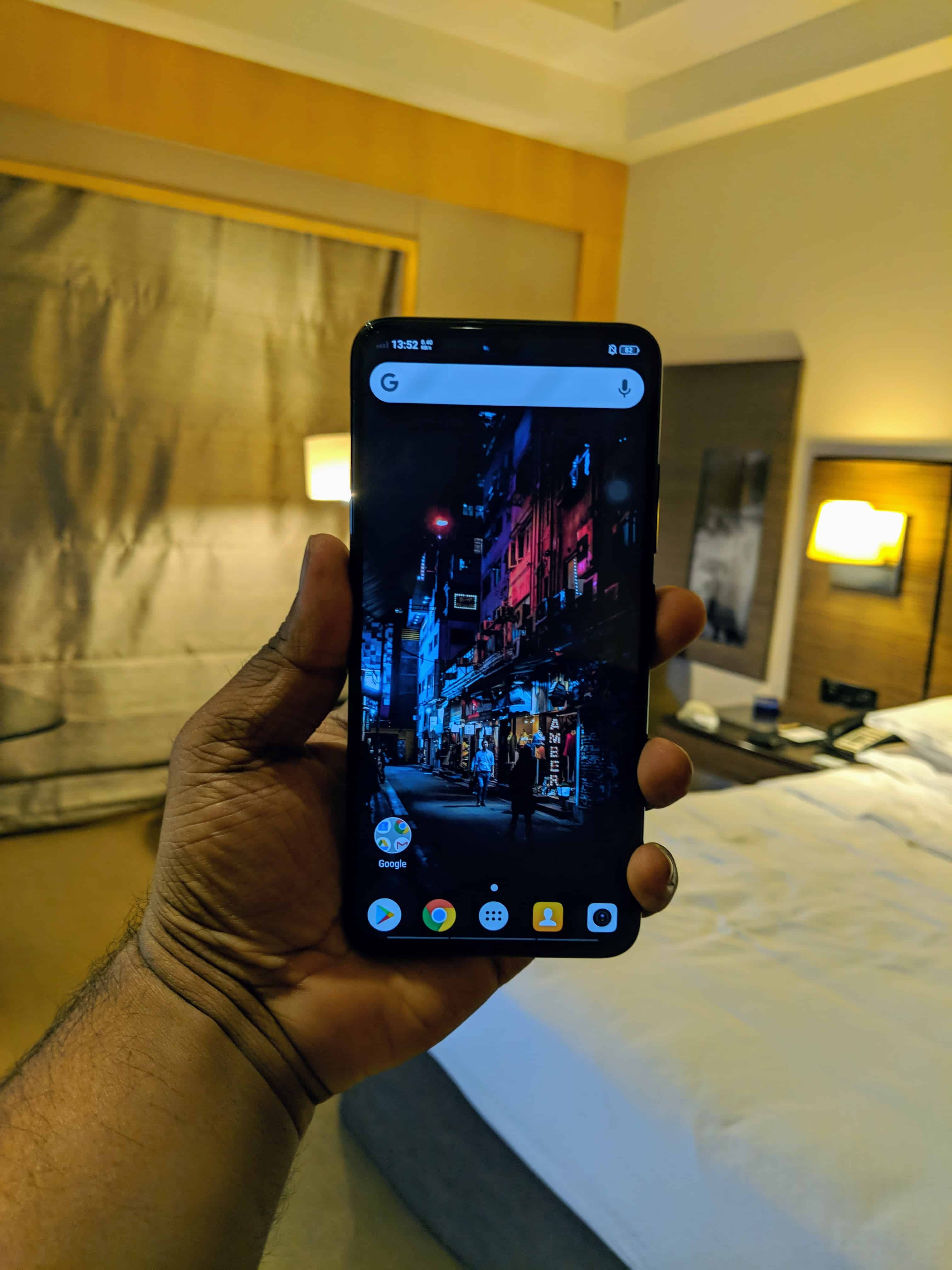 I bet the specifications impressed you. Indeed, it holds even more under its sleeve in terms of special features. But first, let’s explore the device.

Comparing to its predecessor V9, there’re a lot of changes you can notice in V11 Pro. The first thing you notice is its tiny notch. In Vivo V9, the company claimed to feature a relatively smaller notch, and now, they took it to the extreme by keeping the notch so tiny that it only covers the front-facing camera. This notch-design might be an inspiration from an Essential phone, but in the Indian market, Vivo V11 Pro might be the first to feature it. 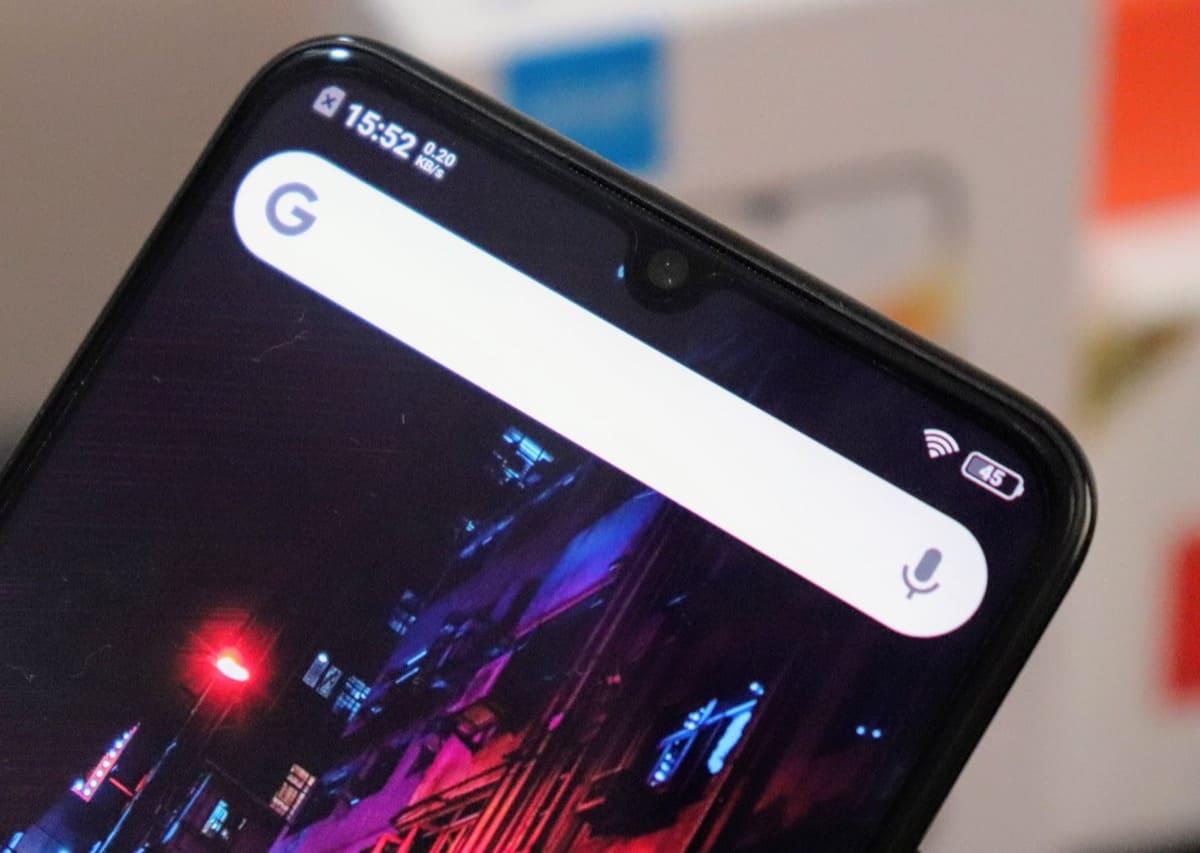 Coming to the front-side, the display is of 6.41inches which the company calls it as Halo fullview display with a screen-to-body ratio of 91.27%. As mentioned already, at the top, the tiny notch is more like a water drop resembling [slightly] the recently launched Oppo F9 Pro. 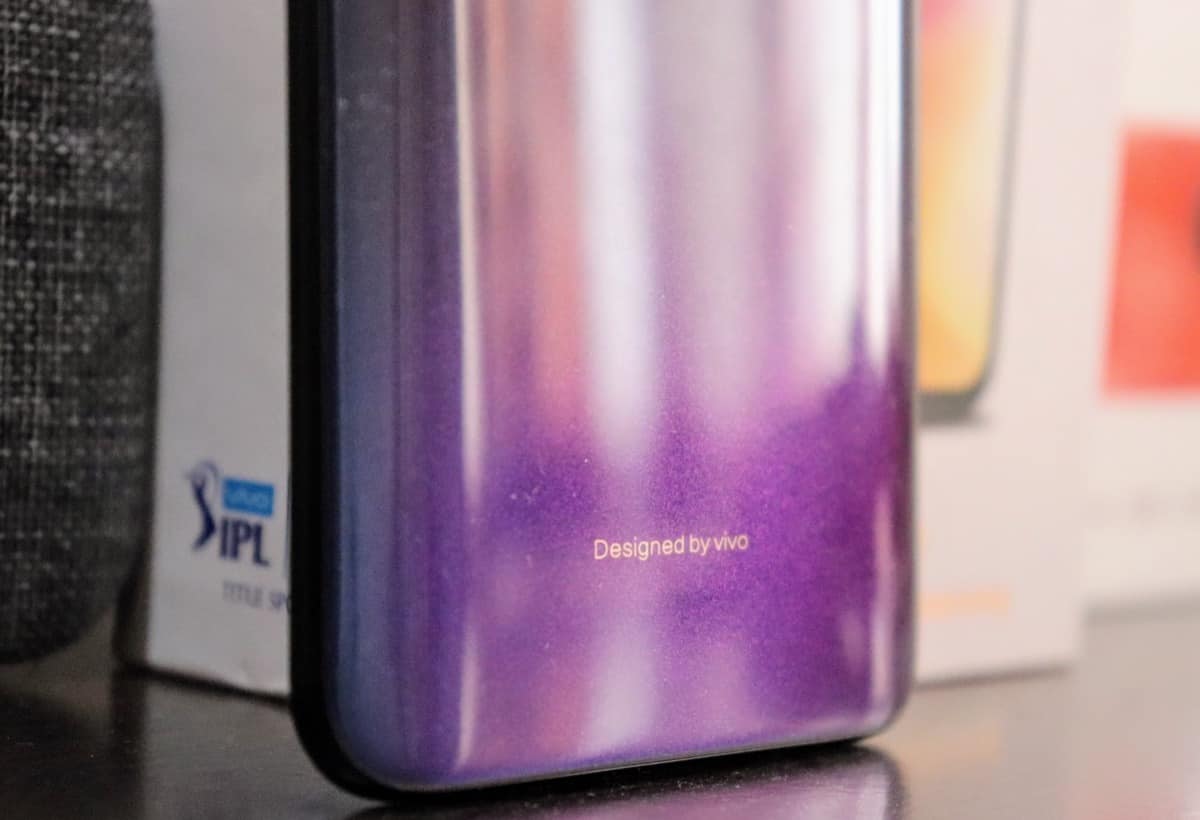 Design wise, the Vivo V11 Pro made me feel like holding a premium flagship. Though the chassis and the body are polycarbonate-made, the rear side of the phone shows twilight colors. The unit I received was a ‘Starry Night’ which on a particular viewing angle looks Violet’ and on the other way around, looks blue. You’d have observed the same design philosophy in ‘Nex’ as well as the Huawei P20 Pro, but on the ‘V’ series, it’s the first time. The filming on the rear side gives a fine polish-look that’s as reflective as a mirror, and that’s why I felt holding a premium-end flagship.

The rest on the rear side does look very similar to Vivo V9. The dual camera placement [vertically] at the extreme top-left does remind of iPhone X. One thing that’s missing on the rear side is the fingerprint sensor when compared to V9. So, where did it go? Well, it went behind the display. 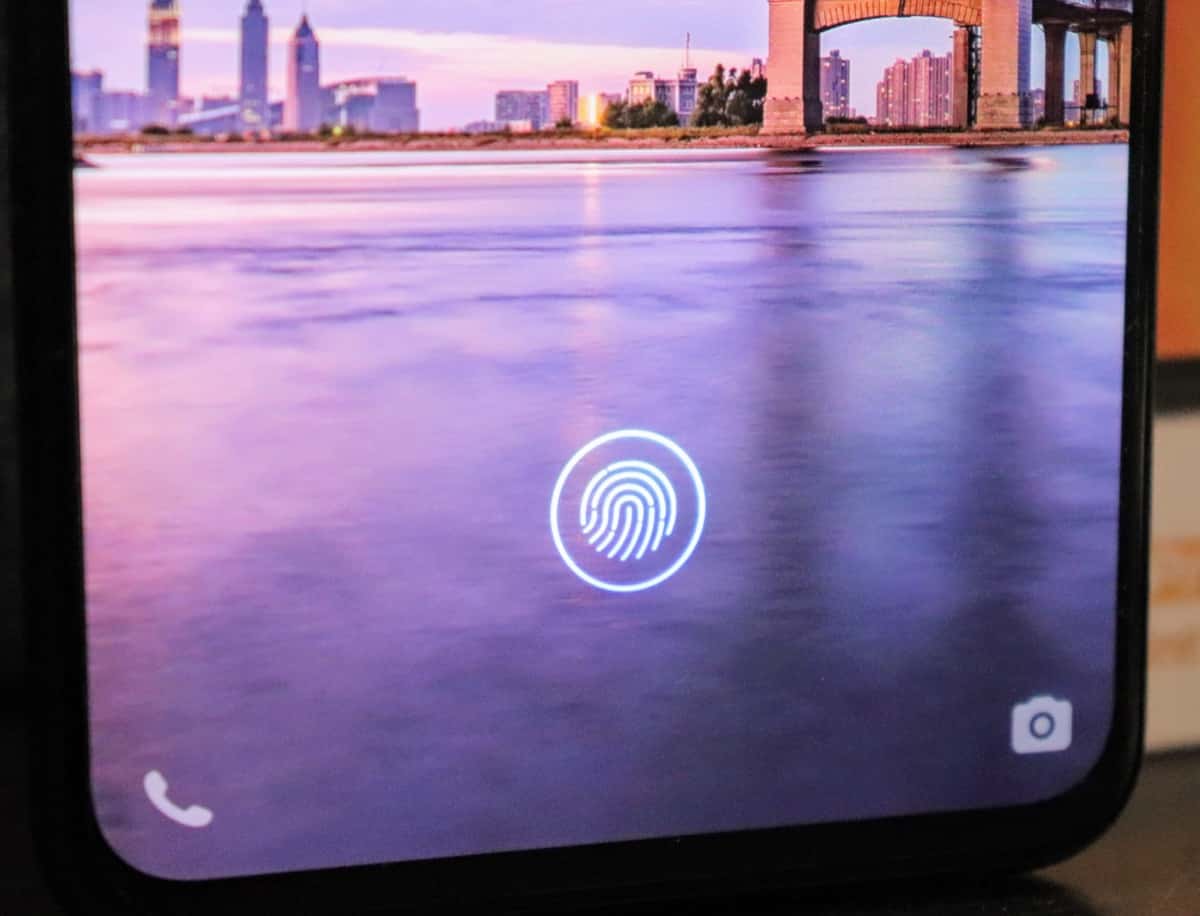 For the first time in the ‘V’ series, Vivo has featured an in-display fingerprint sensor which you might have already seen in Vivo X21 as well as in Nex. The working mechanism is still the same, and this might confirm you that the display is going to be a super AMOLED display! Without that, there’s no way the projected light could take the reflection of your fingerprints and recognize it. Moving further, I’ve set up the fingerprint recognition and to my surprise, the response time is quite fast.

I did try the X21, and there’s was a delay in the recognition, but on V11 Pro, the response time for the fingerprint recognition is quite fast, and you can say, it’s almost as same as the physical fingerprint sensor. Still, I’ve to test it in different environments and asses the speed, but for now, I can say that it’s one of the fastest in-display fingerprint sensors I’ve seen till now.

Unlike the Vivo V9’s face unlock, the Vivo V11 Pro features an IR sensor to recognize your face. This mechanism is quite similar to the one used in Oppo F9 Pro, Xiaomi Mi 8, etc. The company claims that V11 Pro would be unlocked even in low light without lighting up your screen. I was skeptical about it, but it’s true. I’ve tried unlocking it in low-light, and it does unlock it without lighting up the screen [like in Vivo V9].

As far as I tested, face recognition was fast AF. I know that people say ‘OnePlus 6’s’ face unlock is quite fast, and I bet you’ll change your opinion after you experience V11 Pro’s. By the way, I’ve also tried covering my head with a cloth to see if it recognizes, and it turns out – it does. This means I can easily unlock the phone when wearing a helmet without any hassle.

I might need more time to test out the rest of the instances, and see if it could truly live up to my expectations. Anyway, here’s a fun fact – the IR, proximity, ambient sensor are all placed at the top without compromising the ‘notch-space’ and that’s pretty cool! :p

You might have seen the new Funtouch OS v4.0 in Vivo V9, and on Vivo V11 Pro, the company has provided the next iteration – v4.5 on top of Android v8.1. I got to know from the company spokesperson that they will be rolling out Android v9 Pie to both the devices in the coming months.

In terms of UI, the V11 Pro looks like a straight rip-off iOS. I’ve said the same in the V9, and the only new thing I observed in the V11 Pro is the Jovi smart assistant. I’m yet to explore what it does, and will soon update it in my full review of V11 Pro. The rest of the UI like the notification center [dragging from bottom], the way the notifications appears, the home screen, icons, etc. are as same as in V9.

One other feature I noticed in V11 Pro is the ‘easy touch’. This is more like an assistive touch in iOS, and even the background color scheme and icons are very similar. I somehow liked the feature as it comes very handy when navigating, and taking screenshots.

To make the user experience seamlessly easy, the phone does allow to hide the system navigation buttons and replace it with the small gestures [dots or lines]. This not only helped with better navigation but also gave a pure fullview experience.

I know that you people would be interested in benchmarking scores, and you can find it in the above gallery. 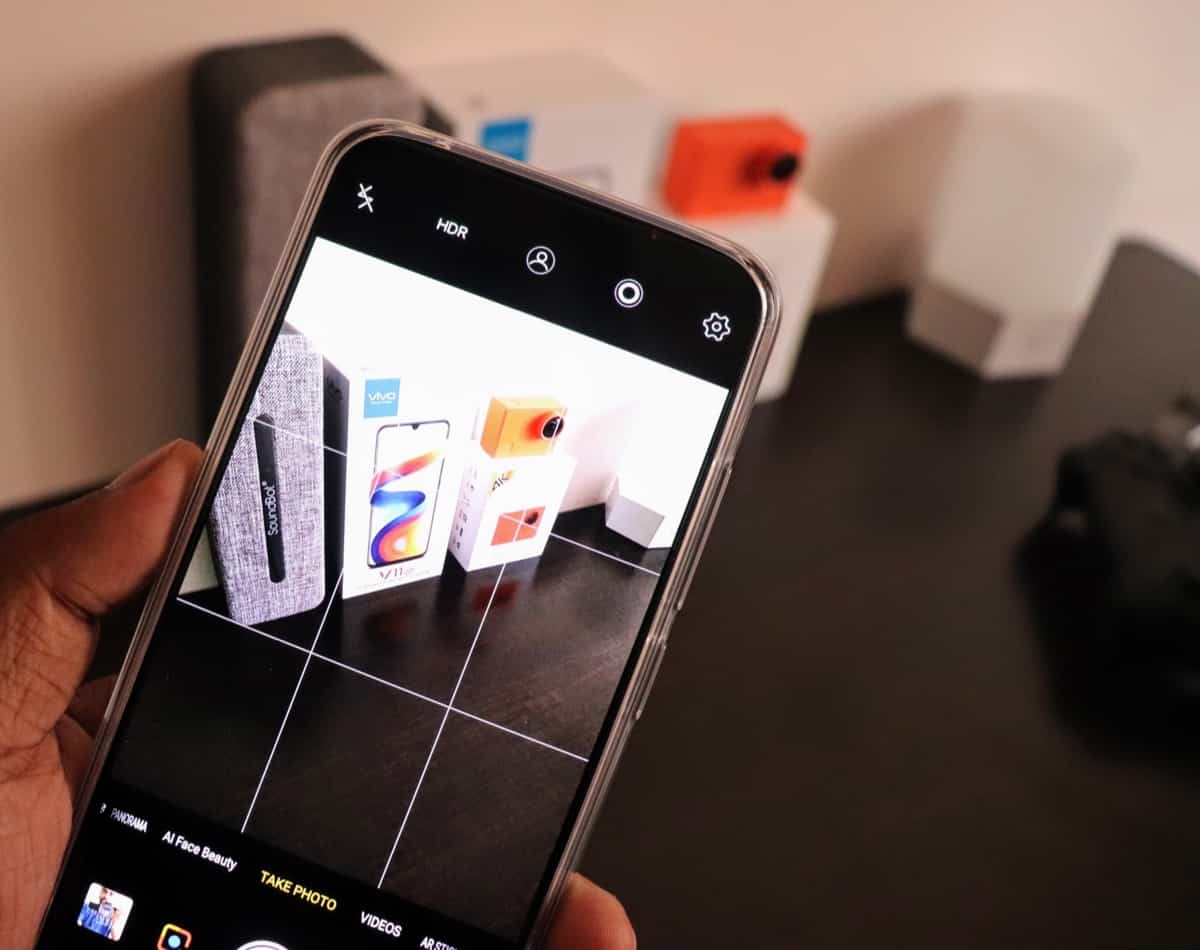 If there’s one thing that Vivo claims to be good at is the ‘Camera.’ Since their inception, they’ve been focusing more on selfie cameras and calls it as their USP. Coming to the V11 Pro’s camera department, the phone features a 12+5MP dual pixel camera on the rear side, and a whopping 25MP AI selfie camera on the front side.

The UI of the camera application is completely changed, and now it even features a ‘Google Lens’. I believe it’s one of the most underrated features in the V11 Pro. Coming to the other features, there’s a new AI portrait framing where the camera prompts you to make changes to the scene, so it can take better portraits. The suggestions it gives is almost similar to the one in Google’s PhotoScan.

I don’t remember whether you can disable ‘AI scene identification’ in V9 or not, but in V11 Pro, you can disable it. I personally feel you should take pics disabling it as my experience is pretty bad. The color pops are quite saturated, and they look quite different from the normal view. I understand that the AI camera makes it better, and I was in an assumption that it just brightens the scene, and adjusts a little bit of color saturation, but in V11 Pro, all I see is more ‘yellow.‘

As said earlier, this is just my first impressions, and so I need more time to explore the ‘AI’ and see if I’m doing anything wrong.

I never liked the selfie camera on the Vivo phones although they call it as their USP, but the V11 Pro’s front-facing camera is truly an asset in the phone. Even without AI beauty mode, the phone takes stunning selfies. The Selfie-Portrait mode on the phone features a lot of modes like Natural light, Studio light, Stereo light, etc. and everything changes the way the light appears on the photo. To make you understand a little bit better, you should take a look at the above gallery.

I’m yet to test the ‘video’ mode, and will soon provide a video sample where I’ll be testing out the phone’s EIS.

There are a lot of things which I should try out like the ‘sound quality’, battery life, gaming, etc. and will soon be sharing my experiences in the full review. For now, I can say only one thing about the phone – I’m totally amazed by the phone.