ROG Phone II is finally official now. Yet again, the leaks have come true, and boy, the device is lit AF. I was invited for a closed press briefing in Bangalore and had a little time to play around which I believe is quite enough to share my first impressions and the hands-on of ROG Phone 2. The ROG phone II is launched in India for a starting price of Rs. 37,999. The high-end version (12/512GB) is priced at Rs. 59,999.

As the gaming phone is the latest edition in the ROG Phone series, let’s have a look at the specifications, so I can give a comparison to the previous-gen ROG Phone.

I bet you’re impressed with the specifications, and just so you know, ROG Phone II is allegedly the world’s first phone running on 855+ SoC. I know Blackshark 2 from Xiaomi with a new variant running on 855+ SoC is getting launched on July 30th, but till then, ROG Phone II is the only smartphone running on this overclocked chipset. It’s actually not new as the first-gen ROG Phone was also launched with overclocked 845 SoC. Anyhow, let me take you through my hands-on & first impressions – 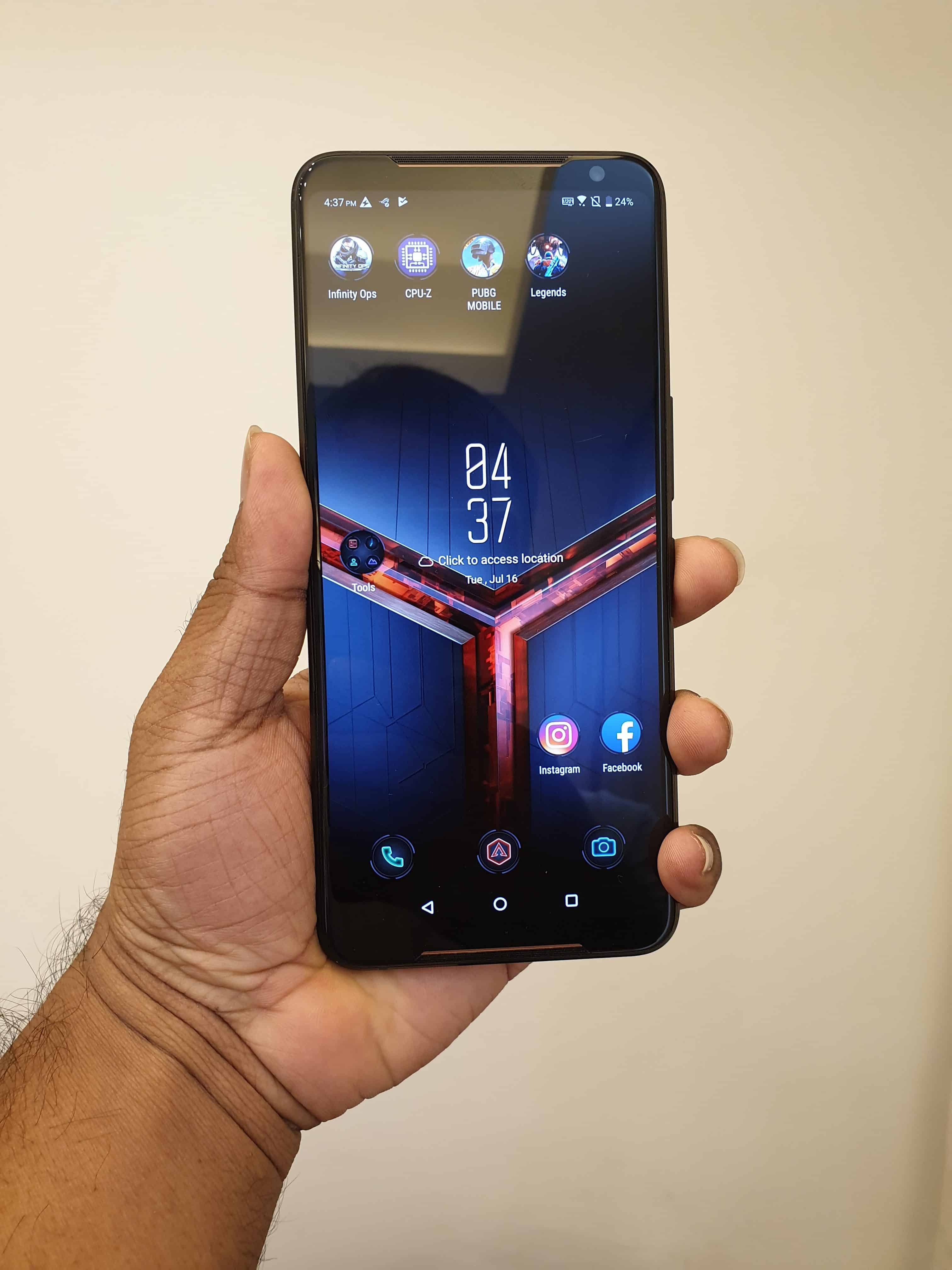 The ROG Phone II has got the same design vibes like in ROG Phone with some small differences. Even this time, the front screen is protected by Gorilla Glass 6 but the rear is protected by GG 3 instead of GG 5. The phone built is top-notch and is made of a single aluminum block. The fusion of metal & glass gives a fresh look and premium feel on hands.

The AuraSync RGB lighting is still there which I kinda feel a little improvement from first-gen as of the light intensity. The rest of the design is as same as in the ROG Phone, I mean, the copper [heating] vents, the lines which give a futuristic touch, etc. The only thing you won’t notice on the rear side is the fingerprint sensor which has been moved under the screen. Yup! You heard that right. ROG Phone II is the first Asus smartphone to feature an in-display fingerprint sensor which many gamers wanted in the first-gen. 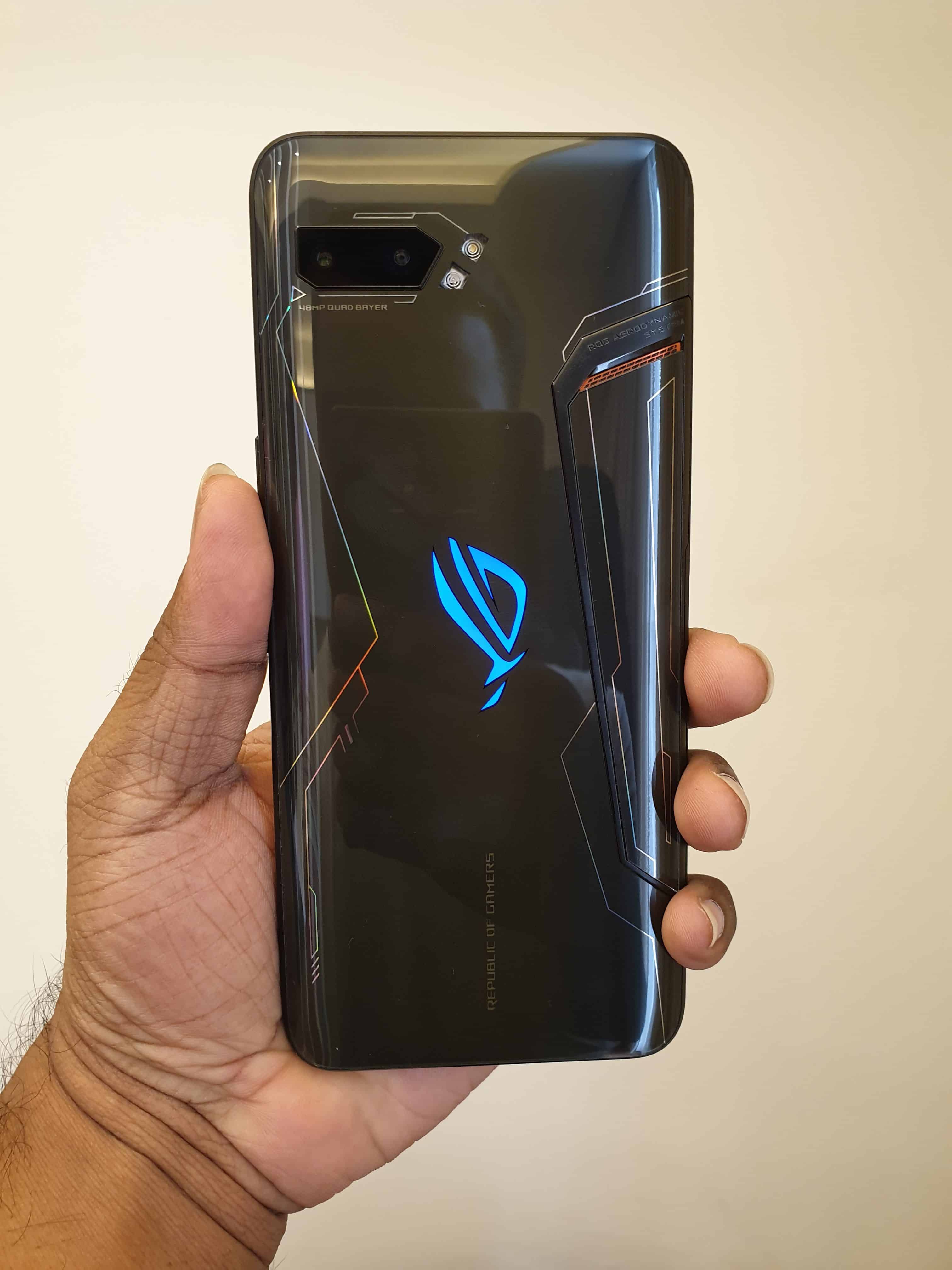 Coming to the camera department, the ROG Phone II has got the same camera setup as in Asus 6z. Even the front camera is an asset as it’s of 24MP, and it’s positioned in a way that actually helps to record the live streams in a better way.

On the front-side, there’s a 6.59′ AMOLED display with a whopping 120Hz refresh rate. Again, it’s a new feat in terms of refresh rate and ROG Phone II is one of the few gaming phones available in the market to feature it. Unlike the Razer Phone 2 which also features the same refresh rate, Asus has actually invested heavily in optimizing the game plays with their partnership with Tencent Games. I’ll show some demo videos of the gameplay soon, but let me explain what other differences I find on the front side.

It still got dual front-facing stereo speakers, 4 mics, and this time, it has 4 Wi-Fi antennas. The USB-C ports on the bottom and side support Q.C 4.0 now. It still got the 3.5mm headphone jack! [brownie points for that] Umm… what else I missed? The battery! Yet again, ROG Phone II is the first flagship cum Gaming phone to boast a 6,000mAh capacity and also comes with 30W charger out of the box. In just 58 minutes, 4,000mAh capacity would be charged up which is comparatively as same as the other fast charging phones. As of increase in the battery capacity, the phone’s weight increased a little bit, and now it weighs around 240gms.

As mentioned previously, the ROG Phone II has an overclocked CPU & GPU which took the performance to the next level. Inside the phone, it still has a 3D Vapor-chamber, carbon cooling pads, etc. which helps to cool the phone internally, and the upgraded AeroActive Cooler & heating vents help dissipate the heating at faster rates. This setup and the long-lasting 6,000mAh battery does help play games for longer hours uninterruptedly.

In terms of gameplay, the ultra-sonic air triggers are well-positioned this time, and they’ve got better sensitivity than previously which gives an advantage over the competition. Of course, I’ve tried playing PUBG, and had 1 kill instantaneously, thanks to the air triggers. [TBH, I’m not quite used to playing it, but compared to what I played in the first-gen and on my Note 9, the gaming on ROG Phone II is quite easy and fun] Without making you bored, here’s a demo video of gameplays! Just listen to the sound! ♥️

Did I forget to tell you that you can actually change the frame rate manually? Also, the PUBG and few other games are optimized for the ROG Phone II, thanks to their partnership.

The ROG UI aka Stock UI 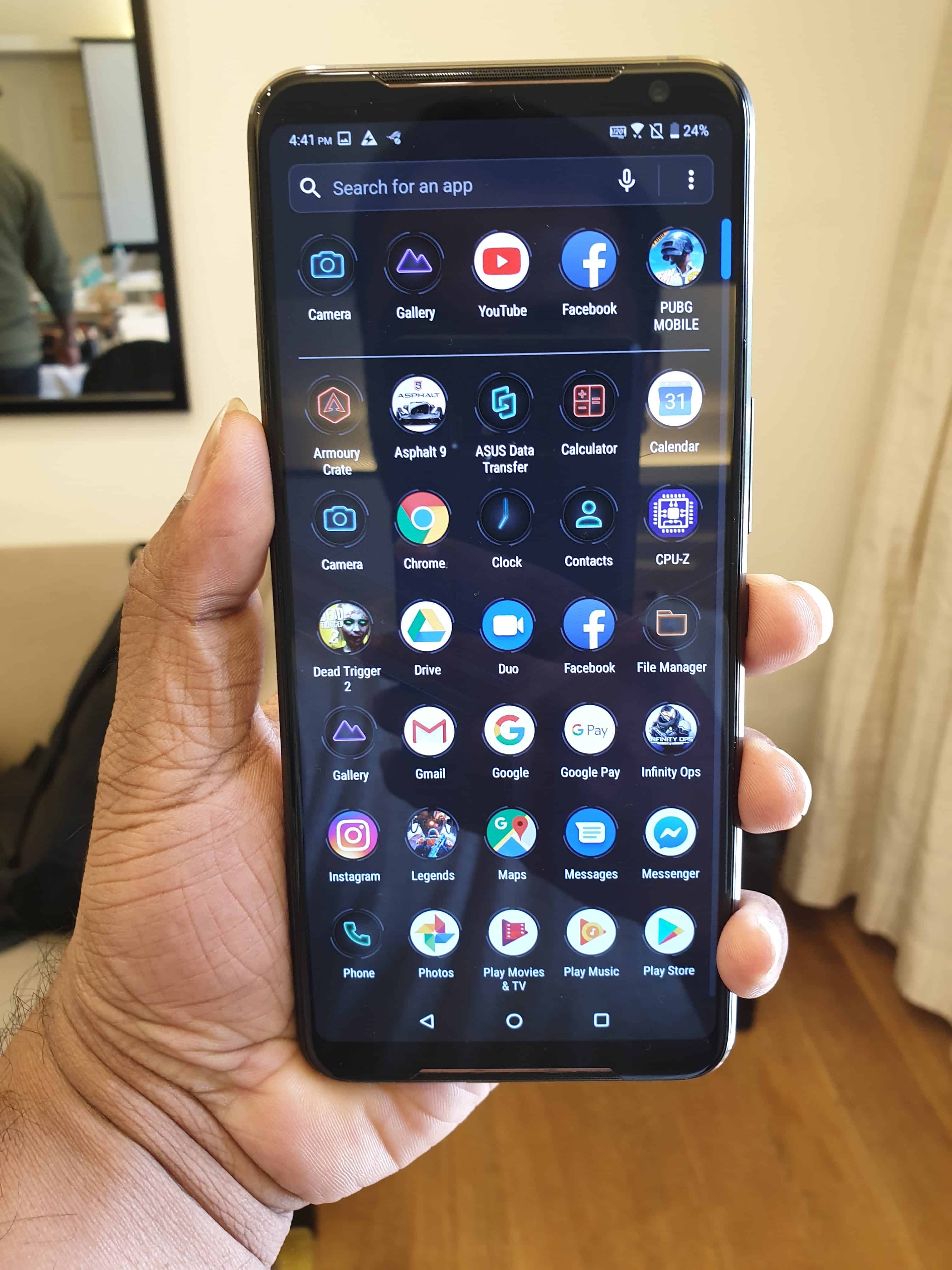 Besides gaming, one other thing I need to highlight here is the UI. In the first-gen, we’ve experienced the ROG UI which is a gaming skin made on top of ZenUI. This time, Asus is actually offering you 2 UIs, and you can select either ROG UI or the classic ZenUI [like in 6z]. Also, both UIs are quite similar to the Stock UI, and you can only find a few changes in the ROG UI. so there you go, less bloatware, and a great UX.

The best part of owning a gaming phone is taking advantage of its accessories. Just like the previous one, the AeroActive Cooler comes out of the box, and this time, it can be attached without removing the case. This time, the cooler is actually upgraded to dissipate the heat both horizontally and vertically. Other accessories such as Mobile Desktop Dock, TwinView Dock, etc. are also available to purchase, and the best part is they’re backward compatible. Also, they will be compatible with the ROG Phone 3 too.

The new accessory that you can purchase this time is the Konai gamepad. Last year, we’ve seen the Gamevice controller, and the new Konai gamepad is quite similar to it, but actually a significant upgrade. You can connect it via Bluetooth, or Wi-Fi or using the adapter that comes with it. This makes it play hands-free on both desktops, or straightly on the phone itself.