It is designed by artist Ricardo Afonso Luis Monteiro.i to think practically speaking the ipad thickness is very small but why I am saying that this ipad is such a realistic means the author didn’t make total ipad as transperent, think practically cam may not be transparent.so he made front cam which may be a high resolution of some 8-14MP, nd it is a opaque and at the bottom the home button is also made opaque, if it is also made transparent with out a metal then this ipad will be such a delicate that even a high wind will break this..so he made some few adjustments and made the parts which must in opaque to be opaque..and the screen and internal parts are transparen, that’s way cool right hats off to Ricardo-Afonso who made this concept!
but wait where is the motherboard, processors, chips and yes the important thing battery?
well if you are science geek or tech lover you actually know the answer..nanotechnology and carbon fiber for connections” this makes it possible the mother board, processor and all the internal parts are made to such a size that are barely seen with naked eye.. 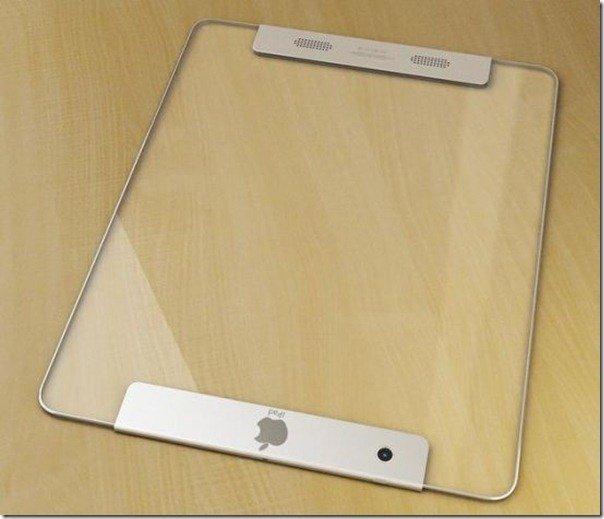 when comes to battery let me remind you ,2 years back around 2011 the scientists at Stanford University were able to create the transparent lithium-ion battery which uses electrodes in a grid with a width of 35 microns(obviously small microns is 10^-6), so we can’t see the battery with our naked eye by the eye and between the two grids the transparent gel electrolyte is placed which increases the conductivity. At that time, the transparency of the battery is approximately 60%, but capacity is poor, dull back up, of course it was a good attempt right..in the following years they gonna improve this existing technology, i think the world genius smart phone makers Apple will gonna make this transparent ipad possible in the following years.